Please take the time to read Patric Douglas' (CEO of Sharkdiver) post on the Oceanic White Tip sharks in the Bahamas and his proposal.  It is an important subject, especially now that this area has been "discovered" and will certainly get more attention, both from good and bad people...
"Cat Island, Bahamas has quickly become the new shark rush for one of the rarer species of sharks, the Oceanic white tip.

This is good and bad news and a test bed for what could be ground breaking shark site development - or the same old multi-user experience with some terrifically bad industry video, a few close calls, and the inevitable shark catch drama/round of "save the" petitions..."
Read the complete post here
Who will take this bull by the horns?
Posted by Unknown at 19:22 0 comments

Sharks deserve to be treated gently.
Photo: Wolfgang Leander (2008)
Click to enlarge
Here is an open letter to all shark dive operators written by Cape Town resident Glenn Ashton. Glenn is a freelance writer, journalist, and researcher. He has much local expertise and has previously dealt with environmental management issues. Glenn is, thus, very well suited to express an expert opinion on the subject.
Open letter to the SA shark dive industry re: best practice.

Hi all,
As a journalist and observer to the debate about best practices concerning shark attraction methods and the shortcomings of some methods, it is clear that the issues that have been raised are extremely important to deal with in order to ensure that our South African shark diving industry has a reputation that we can indeed be proud of.
This cannot only come from a shark diving industry perspective but from a conservation perspective, a tourism perspective, a best practice perspective and most of all for promoting an open and transparent dialogue about the matter - shark diving, either in cages or without - for profit.
There is nothing wrong with generating profit from shark diving. The dive industry is a powerful tool to assist in protecting sharks, in getting the public to understand them and in taking their plight to a wider audience.
Public oversight has assisted in improving practices in all aspects of the shark dive industry and indeed in all related aspects of human/ shark interaction. This mirrors the experiences of other conservation practices in other nature conservation fields which have often learned and advanced themselves through outside pressure.
However it serves nobody when baseless allegations are thrown around, when issues become personalised for reasons that are completely unrelated to the issues at hand and when discussions that are aimed at improving industry practices are marginalised because of illogical and ill informed inputs.
It cannot be denied that public oversight and pressure to change from shark enthusiasts have improved the cage dive industry hugely. The cage dive industry would like to take most of the credit for themselves but that is just human nature.
The same goes for shark diving on the Aliwal shoals and other offshore shark diving spots. The methods used to attract sharks have been shown to be damaging to sharks and yet those who rely on these flawed methods have denied any cause for concern and have instead attempted to sidetrack and personalise the discussion and debate. Others have worked hard to clean up their acts and have listened to outside inputs.
Denial of any problems in how sharks are chummed and attracted obviously serves nobody except the denier and it does not move the debate forward. As a journalist and someone involved in covering environmental management in South Africa I am quite prepared to go out and expose any dangerous or damaging practices to the widest possible audience so that things do change, through either the force of public opinion or the force of law. Both are equally relevant in this case.
It would however be far more beneficial for all of the role players in this debate, especially the shark dive charterers who have been criticised for poor baiting practices, to play a far more mature and responsible role in this discussion. There clearly are operators who have tried different methods of baiting which appear to be non damaging to sharks - through encasing cables and chains in polypropylene pipe - which is rigid and extremely tough and non damaging to shark mouths, compared to exposed cables and chains. Why can this and other useful discoveries not be made best practice?
An industry standard should be agreed upon and any parties who continue to practice dangerous methods of attracting sharks, just as those who do not properly care for, or endanger their divers and customers, or who follow other dangerous practice, must be sanctioned and isolated, if shown to be intransigent in the face of changing toward best practice behaviour.
If we wish to have an industry that is good for tourism and for our image as a leading nature and eco-tourism destination then we must pursue best practice in all aspects of environmental tourism in South Africa. If we wish to be the world leaders in this field, that we claim to be, then we must behave like world leaders. Accordingly the industry must support a move toward transparency and best practice and engage with each other in a constructive way that promotes mutual interests
.
The alternative is to identify and deal with those who refuse to play the game according to mutually agreed rules and isolate them utterly. The choices are simple. So lets rather consider moving on toward finalising what is essentially a straightforward procedure.
A useful first step would be to invite all shark tourism operators to sit down around a table, at a shark tourism conference, of SA operators, and start to hack out the issues, formalise them and put these steps into practice. SA tourism and other regional tourism boards would be supportive - we all know that the industry brings in significant money. Any other relevant parties must also come aboard, including government (Department of Agriculture, Forestry and Fisheries, and Dept of Environment and Water, and possibly Tourism and also the Shark Board but there may be ambivalence about this).
It would just take a few champions of the cause, from within the industry, to drive this. They could reap huge benefits by being shown to lead the way toward the most progressive and ecologically sound practices, and could accordingly advertise along these lines.
This should ideally happen from within the industry - self regulation is always preferable to having regulations imposed on you. But if nothing happens then imposition of tighter regulations may just follow.
Over to you, the people who want to do the right thing, the people who make money out of sharks and those who want to conserve the resource for the benefit of all. Lets see the changes roll on!
All the best
Glenn Ashton
Freelance writer, researcher, author and editor.
Cape Town
South Africa
ekogaia@iafrica.com
Posted by Wolfgang Leander at 11:59 2 comments

This summer I was in Bimini for a Lion Fish spearfishing tournament - it was hosted by the Bimini Bay Resort.  Today I found out via Shark Diver that the resort has joined the Shark-Free Marina program.  Great to see the initiative really take off - for a complete report click here.
Definitely some good news coming out of the Bahamas.
Note: The same resort has received a lot of heat for destroying large areas of mangroves which are prime grounds for juvenile sharks.
Posted by Unknown at 21:52 0 comments

I watched the brief trailer below and want to see more - it is raw, artistic, and different.  David is currently looking for support and funding - for more information go to: http://www.officetoocean.com/.
Just hope that David stays true to the dream and not the work / money / industry...too many have been tainted by their self-proclaimed "passion" for sharks.
Posted by Unknown at 13:54 4 comments

Links to this post
Email ThisBlogThis!Share to TwitterShare to FacebookShare to Pinterest
Labels: david diley, From the Office to the Ocean, shark documentary

What I wrote about Bite-Back in my last blog needs to be clarified. Graham Buckingham of Bite-Back wrote this mail to me - I wasn't aware that he also runs a one-man show.
Wolf:
As the campaign director of Bite-Back I would like to acknowledge your commentary about our ability to help support the Alibaba project. Maybe this will come as a surprise but … I am Bite-Back. All on my own.
Since I set up Bite-Back some seven years ago I have run the organisation (now a charity) single handedly alongside a full time career. Hopefully this article in the Daily Telegraph will help spell out what I do - http://bit.ly/uTMki
In the past it has saddened me that I couldn’t say ‘yes’ to every opportunity that has been presented – but if I felt I couldn’t commit to a project fully I would say so.
In fact, without sponsors, celebrity endorsement or a system for donations (yet), I have been running Bite-Back with passion and enthusiasm … and no financial support.
Such is my ambition to promote shark and marine conservation issues I quit my job at the end of January to take Bite-Back on full time and I remain unsalaried yet more determined than ever.
Now that I have more time, please do get in touch if you think we can work together. After all, without knowing it I could be one of ‘your kinda people’?
I hope so.
Best wishes,
Graham
Thank you for enlightening me.
YES, Graham, you most definitely belong to "my kinda people". Not only that: Your decision to devote yourself to the conservation of sharks and the ocean full time is admirable. You've certainly gottalotta guts!! Hats off!!
Posted by Wolfgang Leander at 10:12 0 comments 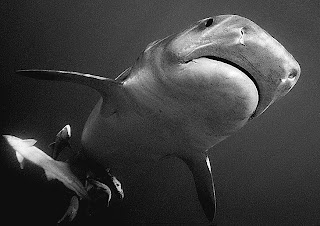 We are all for the sharks!!
(Photo: Wolfgang Leander)
Click to enlarge
Here is a bunch of guys who are deeply concerned about the future of the sharks in the Bahamas and in Florida. They do things without promoting themselves and reaching out for donations. My kinda people.

Once in a while I feel that Felix and I are lone rangers with little striking force when compared to all the well-known shark conservation NGO's and their supporters. But then I see that there are other ones out there, folks like us, with no sponsors or celebrities to help them get their messages through.
Some well established non-profit organizations are so jealous about their work that they won't allow you to get near them - unless, of course, you make a donation.

I once contacted Bite-Back in the UK to try to get them as allies in my early fight against Alibaba (the online shark fin broker, you remember, don't you?) - their answer was as sobering as a bucket of cold water. They laconically stated that they had other other important matters to deal with, so, no, but thank you anyway, and good-bye.

Individuals like the SharkTaskForce, Mark Harding, the Shark Divers, and many others should join forces when there are specific urgencies to be addressed in order to make an impact.

The necessity to save the sharks in the Bahamas is such a case. Both the SharkTaskForce and OceanicDreams wrote blogs about the subject without cross referencing their blogs.

Our motto should be: L'union fait la force.

Posted by Wolfgang Leander at 12:39 0 comments