Writing about sharks in Bolivia - 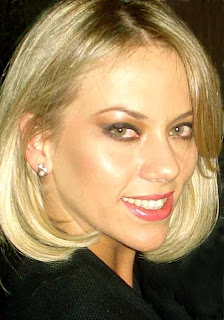 Maria Renee Cortes Barrientos ("Quita")
- is not what you'd expect to be a topic of relevance. Bolivia is a land-locked country, and the vast majority of its inhabitants has never seen, and will never see, the ocean.

And yet - the average Bolivian is part of the global community, and as curious about what goes on in our planet as any citizen of the world no matter where she / he lives.

When a friend of mine suggested that "Los Tiempos", one of the most prestigious newspapers in Bolivia, publish a feature about sharks and the perils they are facing, I was not so sure whether or not I would be able offer local reporters an appealing story for their readers.

I was very wrong.

The chief editor of the paper's Sunday magazine "Oh!", Maria Renee Canelas, assigned reporter and assistant editor Maria Renee Cortes Barrientos*) to interview me and do the job.

Bolivia is full of surprises. It is a poor and 'backward' country but you can run into most remarkable people here. Maria Renee is such an individual.

This young lady is as focused as a professional as are the most seasoned reporters in London, Berlin or New York. She is about to finish school, and will graduate from Universidad Privada Boliviana with a BSc in Communications.

The next goal this ambitious and talented "cochabambina" (= native of Cochabamba) has set for herself is to become a magazine editor and broaden her horizon in Europe, probably in Paris, where she is planning to obtain a master's degree in literature, a passion she has consistently nurtured since she was in her mid-teens.

Maria Renee, aka "Quita", did her home-work before spending maybe two hours talking to me, asking me good questions, and showing the type of empathy only full-blooded journalists feel when they are all fired-up about a new project.

The interview went so well that at the end of the session Quita told me that she felt extremely motivated to swim with tiger sharks next year!!!! Would you believe that???

If I only could turn journalists into confirmed shark champions as easily as I did with Quita it would boost the cause for our beloved finned creatures tremendously.

Here is Quita's article - if you don't speak Spanish just have a look at the layout and the images.

We need the support of enthusiastic, committed reporters like Quita; we need to win them over to make a difference on the general public's perception of the vilified sharks; we need them to tell their readers that to save our oceans we have to keep the sharks alive - we need:


*) Maria Renee is the grand-daughter of Air Force General Rene Barrientos, a charismatic Bolivian president in the sixties. My father was Barrientos' flight instructor in the late thirties - in return, Barrientos taught him a few rather hefty sayings in Quechua, the ancient language of the Incas, which my old man considered a fair enough deal... :-)


Posted by Wolfgang Leander at 22:29 1 comments 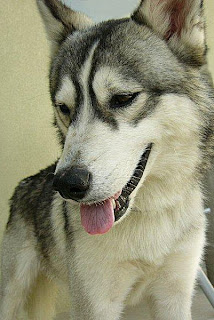 ...... getting Chiara a companion. He is Lupi, short for 'Lupino' (= Little Wolf in Italian), an exceptionally beautiful brown-eyed husky.

I discovered Lupi in one of the many 'mean streets' of Cochabamba, and immediately realized that this aristocratically looking dog was displaced and most definitely did not belong into the 'plebeyan' dog ambiente of a dirty backstreet.

Before snatching him I asked the neighbors if they knew whose dog he was, and since they all confirmed to me that they did not know, I bribed Lupi with a piece of bread (he was starving), and took him straight to the vet for shots, anti-parasite pills, and a delousing bath.

That was three days ago. Chiara was extremely jealous of Lupi in the beginning, and let the husky boy unmistakingly know who the boss is. Consequently, Lupi would not dare to hump Chiara. Now if that is not showing a refined lady due respect? :-)

Theirs is becoming an harmonious relationship, much to my delight as this was precisely what I had in mind when I 'dognapped' Lupi.

I just loooove these dogs, and I am very happy to have them but I had to promise Karin not to adopt (= rob) another canine gamin, even if he / she looked noble and displaced.....

Posted by Wolfgang Leander at 00:41 1 comments

Another opportunity to vote for Cocos Island - this time as one of the nominees of the American Express Members Project.  For details on the project check out the official site or an article written by Jason Heller.
And don't forget to vote for Cocos Island to be a finalist in the New 7 Wonders of Nature campaign.
Posted by Unknown at 21:49 0 comments 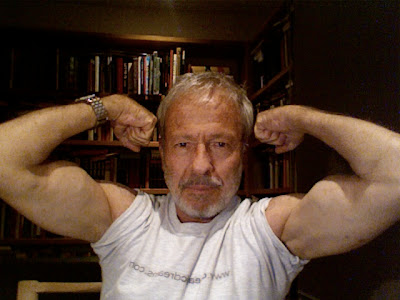 Usually it is my dad that embarrasses me with silly photos of when I was a "baby" - so I thought it was time for some payback.

As my dad got older, he got weaker and weaker - usually happens. This became evident year after year as my dad would try to pull himself onto the boat after a dive. Some good laughs as he hung over the side trying to get up...I guess all the chuckles got to my old man, he has taken it upon himself to hit the gym, and pretty hard.

Apparently he gained 4kgs of muscle, not fat...here is the picture that proves the hard work...not bad considering he is 67...not sure if he will be kicking ass (or getting more a#% for that matter.... :-) - but I do think he will now be able to get on any boat.
Posted by Unknown at 22:23 3 comments

Two weeks ago I was in Costa Rica – work related. As my father mentioned in a previous post, I work for Burson-Marsteller, and one of our clients in the Costa Rica Tourist Board.

During my visit to San Jose I was introduced to Fundacion Amigos de La Isla del Coco and Sistema Nacional de Areas de Conservacion – Costa Rica (SINAC) which are responsible for the up keeping of 160 protected areas including the Island.

We spoke in length about the park and some of the problems it faces – the most obvious and personal to me: shark finning and overfishing. Then the conversation shifted to Cocos Island being one of the nominees for the New 7 Wonders of Nature and how we could generate more awareness and votes for Cocos Island.

The New7Wonders Foundation is behind the New 7 Wonders of Nature campaign which currently has over 200 nominations of natural wonders around the world.

People are asked to support and vote on various nominees until December 31, 2008 – at this point a total of 21 candidates will be shortlisted for the final voting stage which will run through autumn of 2010 when the winners will be officially declared.

Aside from Cocos Island, there are other locations that deserve our attention and our vote: The Galapagos Islands, Malpelo, Belize Barrier Reef, Great Barrier Reef among others.

Each email address (one person can vote multiple times) can select seven locations to vote for. While the vote does not have a direct impact on saving sharks – it will bring worldwide attention to these “Paradise Lost” places.

To vote, either click on the Cocos Island badge on the right or click here.
Posted by Unknown at 12:01 0 comments

Links to this post
Email ThisBlogThis!Share to TwitterShare to FacebookShare to Pinterest
Labels: 7 wonders of Nature, cocos island, seven wonders of the world

Alibaba.com will once be called to account by the international public...

As Alibaba.com has done nothing with regard to facilitating the shark fin trade on their site, we hardly expect an answer from them any time soon.

Currently they list over 500 results for "shark fin" - unfortuntately, some are even from the US.

Having said that, we still continue to attempt to reach out to them - maybe not as nicely anymore...
From the Wolf to the spin doctors at Alibaba.com:
"One day, when you will have to yield to public pressure, and decide to stop hawking shark fins, you will hypocritically babble something about your respect for people's "cultural choices".

You will declare that you were not "taking sides in the issue" but just complying with the expectations of your shark fin trading clients to enable them to pursue their business as any other member of your platform.

War criminals put on trial invariably state in their defense that they were just "following orders".

You and your superiors have the same mentality.

I know that you don't feel ashamed at all about being sly complices in the environmental crime of exterminating sharks, mainly to satisfy your countrymen's insatiable appetite for a dish that should taste bitter by now.