Regardless I need to record the shows for the old man :)

I just finished walking Tibu and was reading CNN when I came across this article - it is just a reminder of how "intelligent" we really are as a species...not only sharks need to be saved from us - the whole world does.

Should my mom be jealous? 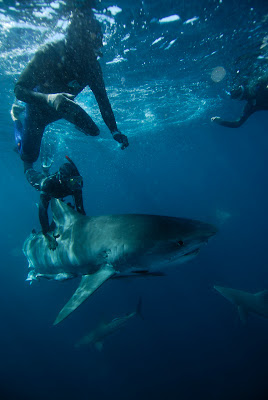 Nice shot by Roger Horrocks of my old man and his mistress...

I just finished watching the Larry King Live special on sharks - and was pleasantly surprised by the message, panel, and what the survivors of shark encounters had to say. Rob Stewart (Sharkwater) was also interviewed who I had the pleasure to meet and have dinner with in Key West.

Watch his movie "Sharkwater" when it comes out!

...and it is not about their success in China, it's about their business platform supporting the trade of shark fins. The persistence is paying off and mainstream media is taking notice. The article, Sharks Circle China's Alibaba.com, was written by Bruce Einhorn.

Alibaba.com continues to stand by their position saying: "We had an open dialogue with activists, we took their suggestions and opinions on board and reviewed our policies…. We decided that our current policy is the appropriate policy at this time." - Alibaba spokeswoman Christina Splinder.

There was not much of a dialogue with the "activists" - more like fluff that did not mean anything and an attempt to brush them off.

The first time my father dove in Florida was in Key Largo in 1984 with Quiescence (dive operator). Since then, we have become regulars (myself more since I live in Miami). The owners have not changed - maybe more wrinkles and less hair ;)...Last weekend they invited me to their 30 year anniversary - music, beer, bbq, and friendly people - of course there was some Jimmy Buffet going on.

What makes Quiescence so special besides the fact they only take six divers per boat are the people...

Take a look at some of the photos of photos of the history of Quiescence. 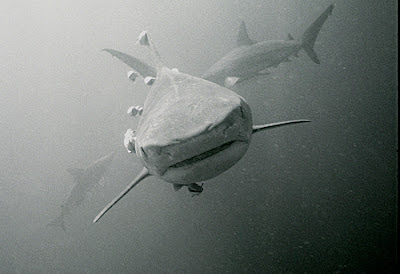 The Discovery Channel has gotten in touch with The Sharkman in reference to the letter that was sent by Ila (Shark Week 2007 lineup), read below...for now words, remains to be seen if these will turn into action - but it is nice to see they are listening and reaching out:

"Dear List members and Friends. As you all know, less than 48 hours ago, Ila sent out the Letter to Discovery Channel. Here is an update of the events that followed. Within 12 hours, I had the first response. I received an email from Katherine Nelson at Discovery. She thanked us for the letter and told me that Discovery would be very happy to discuss the issue and she asked me for my personal phone number.

I immediately wrote her back and thanked her for the fast response. A few hours later I received another email, this time from Jeff Hasler, Senior Vice President of Development and Production. He thanked me for my response to Katharine's letter and told me that he would like to call me later.

This afternoon at about 3.30pm my time, Jeff Hasler phoned me and we talked for around 45 minutes. He was very keen to discuss the issues we had raised in the letter and also agreed on quite a few of the points. We talked about the problems that sharks face as far as finning, habitat destruction...etc..... and we also talked about the media image in general. I told Jeff that we all understand that Discovery needs the ratings and for this you need the drama and the action, and that we do not have any problems with Discovery showing a few interviews with shark attack survivors, as long as these are balanced out with scientific research and conservation issues. Action does not always have to be in the form of human victims.

We all know that sharks are predators and their hunting techniques on their own are also awesome to watch. We also discussed shark finning and shark research issues in detail. Jeff is a guy with a hell of a personality and we both share the same views and we are both very confident that together we can come up with some great projects for future Shark Weeks.

Jeff promised me that Discovery Channel is there to listen to our views and he wants to take this to the next level. We will be having further discussions to find out what topics we can explore together and than we will also set up a meeting between a small select group from Shark-L and Discovery Channel. During our talk Jeff told me that I have already given him two great ideas to work on.... and...... oppsss better not let the proverbial cat out of the bag yet. Jeff and Discovery Channel made my day and I can promise that together, we are going to make a better future for the Sharks.

Thank you to everyone that was involved in this. please feel free to spread and publish this email.

Discovery Channel’s Shark Week is coming to a TV near you – however, many of the episode titles still make reference to sharks as mindless murderers:

Ila France Porcher will send a letter to the Discovery Channel requesting them to stop perpetuating the killer image of sharks which thwarts all conservation efforts. Have a look at the letter (http://sharkwords.blogspot.com), and if you want to join forces by having your name and address added to this important petition, please ask Ila at: ila@smartech.pf to sign you in - that is ALL you have to do.

At least someone gets it

Finally someone in the media seems to get it right. Juliet Eilperin wrote an article about shark finning for the Washington Post titled: "Fish Story's Reality is that Man Bites Shark - it's 4 of us a year, Millions of them."

I think we should contact Juliet and let her know about Alibaba.com and their support of the shark finning industry... 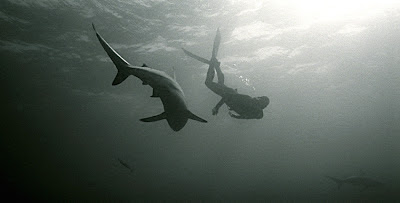 My old man just sent me this email with the photo above:

"We enter their world, and we look at them in awe - they are perfect! How can we not fight for their survival?..." - Wolfgang
Posted by Unknown at 20:57 1 comments