As I list past posts I will also include brief articles on some of the new people that I met on the trip...


All of last week was completely shot – current and visibility made for a dry week – the dive operator said that has never happened before.  I must admit that the people took it really well considering that some came from Europe.


So today was the first day with a new group of people – four stayed from the week before – and yes, the visibility and conditions were finally good.  We had plenty of lemon sharks and two tiger sharks of which one was a juvenile.  It is always a treat to see these magnificent animals, and according to the captain conditions from here on should only improve, which is a good thing.


Last week I gained about 5lbs – ate a lot and moved very little, have made up for it today, freedove for 5 hours and going to watch what I eat for the rest of this week."
Posted by Unknown at 21:05 2 comments

Believe it or not I had completely given up on writing any more blog posts after Nov. 10th until about the Nov. 17th when we went out for the second part of the trip.  To recap what we did during the seven days where conditions did not allow for any worthwhile diving: eat, read, and watch movies (Jupp and I now have a tradition that we watch Super Bad every time we dive together).  Usually when you dive several hours a day you burn many calories, in my case, I was packing them and padding my tire, 5 lbs worth.


Below is a link to some photos of the gangs exciting activities - hats off to all of them for remaining positive all considering:


Promise that more interesting stories and photos are coming up soon...
Posted by Unknown at 20:13 0 comments

A Birthday to Remember 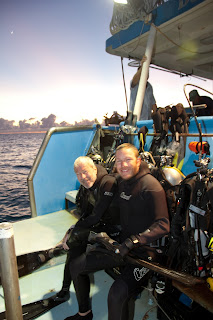 Day after diving (Wolf and Felix).  Photo by Mike Ellis

Little did I know that this would be my only post for the first week of the trip - unfortunately we were hit with bad weather that made for horrible conditions.  The captain had mentioned that in all his years he had never had w full week be completely lost.  This was partly in thanks to tropical depression Ida.


Nov. 10, 2009
This will be a birthday that I will always remember – today was the first time that my dad and I got back in the water to dive with sharks.  Could not have asked or wished for anything better.  Our trip to The Bahamas was delayed by one day – wind was blowing hard and waves in the Gulfstream were too big to take the boat out.   Eventually conditions allowed us to make the trip across …


The afternoon was spent getting everyone acclimated with the water, gear, and four lemons – we stayed in the water until early evening.  What stuck out the most today was seeing my old man’s yellow snorkel on the surface – it has pretty much become synonymous to any diving memories I have of him.


Onboard is a nice and diverse group of people – some we knew from before and others new.

I have also been able to reconnect with my cousin Dinah whom I had not seen in about 15 years – she made the trip from London with her boyfriend, Nick. Meeting both was a true highlight for us Leanders.


Looking forward to the next two weeks of diving among sea wolves…
Posted by Unknown at 09:39 0 comments 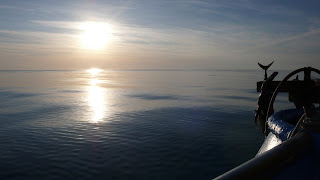 I spent the last two weeks vacationing in my home country hence the blog has been particularly quiet as I did not have any internet access - however, I did have my laptop with me and wrote posts for most of the days I was diving which I will be uploading.  Hoping to include various photos and videos that will go along with the stories as well as write about the people I met.  Lot's of new faces, but old ones as well... 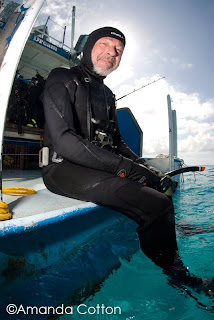 One year ago everything was perfect - at least close to it - diving in the Bahamas with a great group of people and my old man.  When the week came to end I just assumed that I would repeat the trip next year and the ones to come after that, never even thinking that this could possibly be the last time I dive with my dad.  Was I wrong...

2009 started off with me discovering that I had WPW - needed an ablation - not so bad, but you can imagine how concerned one becomes when it has anything to do with the heart - especially thinking that you may not be able to dive again.

Then my father was diagnosed with stomach cancer - which was successfully removed (including his stomach), then had a pneumonia while in intensive care (he had to be induced into a six day coma), and, finally, had to endure a four months intense radiation and chemotherapy treatment.

June / July I have a SVT and need to have another ablation - doctor promised me that it would be the last one...which so far it has been.  During all this I never stopped diving and the heart has not been an issue - tick tock, it is ticking.

So all this things combined have made it a bad year? Well - my wife says it has actually been a great year: My father survived a massive illness, my heart is good, and tomorrow I am off to dive with my old man for the first time in a year.

I'll write from the Bahamas but will post after as there is no internet connection on board the Dolphin Dream.