To touch or not to touch...

When it comes to sharks, this seemingly never ending controversy stirs up a lot of thoughts and emotions.

Here is a photograph of me caressing a lovely tiger shark taken by Kay-Burn Lim, an Australian professional photographer whom I had the pleasure to meet during my recent Tiger Beach trip. 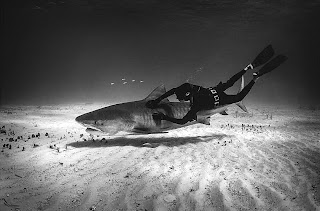 I quite like the image as I believe it eloquently transmits the essence of my feelings for sharks.

For many divers and non-divers touching sharks is a thorny issue. Not for me. I just do it because I love to touch sharks the way I like to touch people I am fond of.

Sure, that sounds rather simplistic but then again, I am a simple minded guy, and as such I do not waste any thoughts ruminating whether it is right or wrong to touch wild animals. I leave those lofty, sometimes even pseudo-scholarly discussions to those self-professed lovers of nature who believe have the "authority" to pass intelligent judgments on that matter.

Let me just say this: I do not "ride" sharks, holding on to their dorsal fins to let them pull me through the water or, much worse, grabbing their tail fins as I often see totally insensitive, disrespectful and mindless rough diamonds do it. I touch sharks gently, let their bodies glide through my hands, and  enjoy the physical contact with another creature.

At any rate: It is my firm opinion that only rather experienced shark divers should, rather could, engage in this closest type of interaction with sharks. Sharks speak with their bodies. You have to learn that language to understand these gentle, still widely misunderstood wild animals.

Read my disclaimer in the upper right side of this blog.

And if you feel like reading more on the subject, I recommend that you open this link - it's an article that appeared in New Zealand on  November 25, 2013.

Posted by Wolfgang Leander at 08:19 0 comments

Neither Felix nor I will ever scuba-dive with sharks. 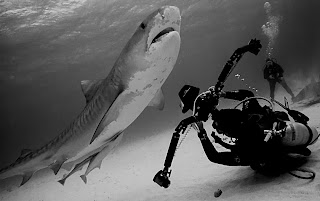 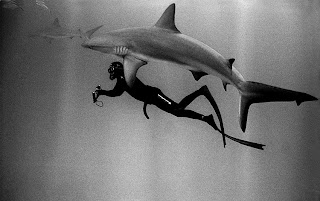 Posted by Wolfgang Leander at 23:08 0 comments 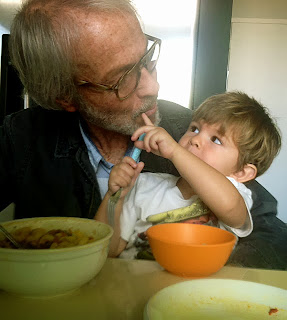 
*) Neapolitan Italian for 'good noodles in a broth'.

Posted by Wolfgang Leander at 07:45 0 comments