A final note on Discovery's Shark Week from my friend Erin:

"I’m glad that Shark Week is over. A few weeks ago my daughter and I were watching TV when a promo came on and scared the heck out of her. It seemed completely one-sided, with no signs of balance or hints of the beauty that Wolf's photos demonstrate. Certainly there are scary shark stories but they need to be told truthfully with the beauty and wonder of sharks celebrated as well."

I do not think this is the reaction we want the up and coming generation to have of sharks - it is enough that "Jaws" instilled so much fear that many were even scared to take a dip in the pool. Maybe one of Shark Week's up coming titles could be "Alibaba.com - Deadly e-commerce" 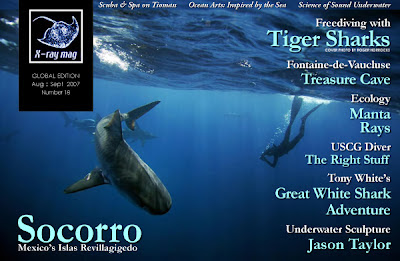 X-Ray Magazine featured an article written by the Wolf - you can read it here (PDF 480 KB). Photos credits go to Roger Horrocks, Sijmon de Waal, and Wolfgang Leander. Hope you enjoy it.

Save the Sharks of Ecuador! 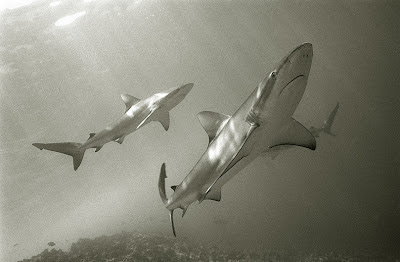 This is the letter I will to send to President Dr. Rafael Correa. If you want to express your support, please send me an assertive e-mail - wolf@oceanicdreams.com - with your name and residence (city / country). I will add your name to the list of supporters and forward it with the letter to Dr. Correa.

I am writing to you personally to implore you to re-instate Decree 2130 to ban illegal shark fishing and shark finning, not just in the Galapagos Islands but throughout the territorial waters of Ecuador.

I am a shark photographer, and I have been visiting the Galapagos regularly since 1997. As a diver I could see for myself every time I returned to the islands that the shark populations in the archipelago are dwindling at an alarming rate.

You are probably aware of the fact that sharks play an essential role in the oceans, and that removing them will have catastrophic consequences for the delicately balanced marine biodiversity.

I am sure you also know that most sharks are being fished for their fins. One does not have to be an activist to be highly disturbed at the ongoing controversy: shark fin soup versus the health of the oceans.

Unfortunately, because of the huge amounts of money involved in the international shark fin trade, no sensible compromise seems to be feasible - it is, thus, either or.

While I fully appreciate that the local fishermen have their own demands which you, as president of all Ecuadorians, have to take into consideration, I plead with you to protect the sharks of the Galapagos, and of the mainland coasts, from human depredation.

As in other parts of the world, shark tourism has developed into an interesting alternative source of generating foreign exchange and creating many jobs. Being an avid recreational diver I can attest to the incredible attractiveness of the marine life in the Galapagos.

What I have seen in South Africa and in the Bahamas in terms of marine eco-tourism could easily be developed in Ecuador as well.

Apart from being home to a fauna not found anywhere else on our planet, the Galapagos could become a mecca for shark divers from all over the world.

You have the authority, and the historic opportunity, to save the Galapagos from an ecological disaster which would severely affect Ecuador's image as a top international tourist destination, and thus hurt the economy of your country for a very long time.

I am sure that the vast majority of your fellow Ecuadorians will feel the way the world community does about the uniqueness of the Enchanted Islands, and the need to keep this treasure intact for future generations.

Mr. President, the power to make a difference lies in your hands. Your countrymen and the citizens of the world trust that you will not waste it.

Thank you for listening to me.

Posted by Wolfgang Leander at 15:48 2 comments

So Discovery’s Shark Week has come to an end and to be completely honest, I have mixed feelings. Opposed to getting into details, I have decided to give a one sentence thought of each episode.

Ocean of Fear: The Worst Shark Attack Ever: Turns out that it was not the worst shark attack ever, in fact some survivors never even saw a shark – hype in title for ratings.

Deadly Stripes: Tiger Sharks: By far the best episode, great human/shark interaction, Mark Addison seems like a stand-up guy (my dad can attest to that) – really enjoyed it…hype in title for ratings.

Shark Feeding Frenzy: Sucked, the human / tuna blood test was a joke...hype in the title for ratings.

Sharks: A Family Affair: Good episode – reminded me of the Leander clan – including the fights ☺

Sharkman: A bit too long, but it was nice to see the human/shark interaction.

My friend Erin did mention something to me that just goes to show the effect Shark Week had – I have asked her to write for the blog and will post it shortly.