Be sure to take a look at Oceana when you have a chance. The organization has a section dedicated to sharks and a very complete report on the global threat to sharks (PDF 4.7MB).

Links to this post
Email ThisBlogThis!Share to TwitterShare to FacebookShare to Pinterest
Labels: global threat to sharks, Oceana, shark report

Neal Watson is not a shark expert..... he is a vulture. 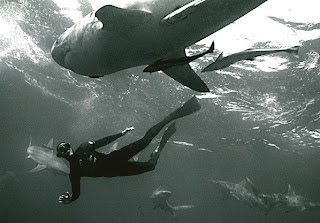 
This self-styled diving 'legend', who is the president of the Bahamas Diving Association, and runs a couple of dive operations in the Bahamas and some other places in the Caribbean, knows next to nothing about sharks. Unfortunately, the press people believe he does.

In several interviews following the tragic accident on one of Jim Abernethy's shark dive trips to the Bahamas last Sunday, Watson self-righteously claims that he has "warned" Jim for running cage-free dives with 'dangerous' sharks such as tiger sharks, lemon sharks, hammerhead sharks, bull sharks, and mako sharks.
His self-serving statements smack of envy, and instead of informing the media objectively about shark diving, he irresponsibly, and plain stupidly, fuels the reporters' hunger for sensationalism in lashing out viciously at Jim Abernethy, one of the most respected shark dive operators world-wide.

To: All Dive Operations Conducting Questionable Dangerous Species Shark Interactions in the Waters of The Islands of The Bahamas
From: Bahamas Diving Association, Official Recognized Diving Association for 36 members of The Islands of The Bahamas
To Whom It May Concern;
We have become aware that some dive operators have chosen to disregard standard safe-diving practices as it relates to interactions with Tiger Sharks and other potentially dangerous species of Sharks, in various locations within the waters of The Islands of The Bahamas.
The Bahamas Diving Association endorses and suggests all dive operators in the legal waters of The Islands of The Bahamas follow GMAC guidelines for conducting potentially dangerous marine-life and human interactions.
In such, we recommend all operations immediately cease and desist conducting open-water non-cage Shark Diving experiences with known species of potentially dangerous Sharks, such as Tiger Sharks, Bull Sharks, Hammerhead Sharks, Lemon Sharks & Mako Sharks.
Species that we have determined safe to interact with outside of a cage are Caribbean Reef Sharks, Black Tip Sharks, Black-Nose Sharks, Nurse Sharks and Silky Sharks.
Many operators in the Bahamas conduct shark diving interactions with ‘safe’ species, and have done so for over 25 years without a major incident. However, due to the potential negative behavioral reactions of Tiger Sharks, Bull Sharks, Hammerhead Sharks, Lemon Sharks & Mako Sharks, purposeful feeding or interaction with these species without a proper shark cage is highly discouraged.
The Bahamas Dive Association (BDA) would be glad to help communicate industry-standard safe shark interaction practices, should you need any assistance with your procedures. This letter will be copied to the Bahamas Government, plus all diving insurance and training agencies serving The Islands of The Bahamas.
Signed,

Mr. Neal Watson
President
Bahamas Diving Association
These statements clearly show that Watson does not have a clue about shark diving. To encourage cage-diving with species he considers 'dangerous' serves no other purpose than to perpetuate the killer-image of these sharks.

Mark Addison, another highly respected non-cage shark dive operator from South Africa, has this to say:
"As you know cages spread fear, not understanding. It is never going to be enough to say why we do it but it is what we do. This is the time for understanding, not fear."

The tragic accident of Marcus Groh is the first shark dive fatality ever. Watson did not mention that to the press. Suppressing such a significant fact unmasks this not so honorable gentleman.

Neal Watson is, in my opinion, a disgrace to the diving industry.
These are the letters I wrote to this not so honorable gentleman: