So far, no arrest has been made. The fisherman who killed the sharks is free to go about his business but will certainly not touch any sharks in the MPA - at least not while the case against him is pending.

Friends of mine wanted to see, and photograph, the corpus delicti (frozen and locked) but were denied access to the tiger shark carcasses that have been confiscated a few weeks ago.

We all hope that the culprit will be convicted to the full extent of the law. The judges have a unique chance to use this case to show that they mean 'business' when they read out the sentence. That message should resonate throughout South Africa, and beyond.

Peter Symes, Editor of the X-Ray Magazine, and Fiona Ayerst, a South African lawyer and underwater photographer, have written two passionate features on the subject. Please read them, and send the links to your friends: 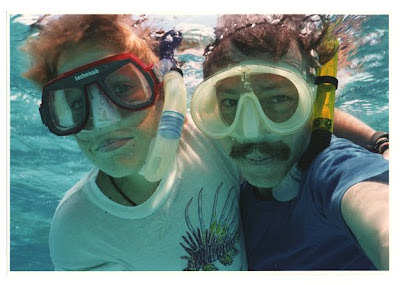 It won't be the first time the Leanders will be diving together. 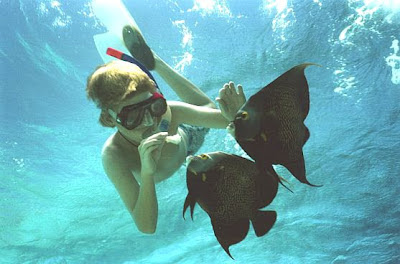 Me some twenty + years ago.... As much as I love to be nice to animals, I will certainly not do THIS with the tiger sharks of Aliwal Shoal!! :-)
That is it - I have booked my flight to Durban, SA. I will be there from April 10th - 20th to dive with the ladies and meet the tribe at Aliwal Shoal. Looking forward to spending some time in the water with my old man and meeting some of his friend (both under and "overwater").

The Wolf already begun his journey to Africa and will spend the next days freediving with White Sharks - cannot wait to hear the stories and see the pictures.

I am definitely excited, never been in the water with such large fish...
Posted by Unknown at 06:26 0 comments

Humans at their best

This video speaks for itself:

Mark Addison speaks up in support of Jim Abernethy 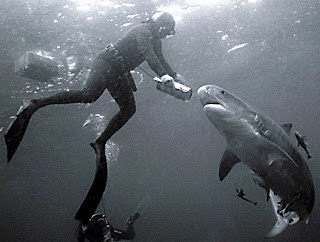 Mark Addison of Blue Wilderness, pioneer of Tiger Shark diving in South Africa, makes a forceful plea for cage-free shark diving in support of Jim Abernethy and other professional shark operators who believe that educated divers who take personal responsibility need not be patronized by some 'well-meaning' Big Brother.

To whom it may concern

The reason for this letter is to place on record my support for Jim Abernethy and the like-minded “cage-less” operators of this world. First and foremost, my sympathies to Mr. Groh’s family and friends on his untimely passing. Secondly, my sympathies to Jim and his team – this is a traumatic time and despite the unnecessary distractions contained in the vitriol of Mr. Neal Watson and his cronies – I wish them well.

I live and work in South Africa. My business has crystallized around “cage-less” shark diving over the last twenty years. My efforts span the entire eastern seaboard of South Africa, which brings me in contact with many wonderful shark species and some fantastic locations and marine settings. My privilege of working with these many species over such a prolonged period of time in no way makes me an expert but I have experienced the gamut of this strange world’s people.

As a pioneer in this field in South Africa I have been accused of many things, as no doubt Jim is being accused of now. As safe as I believe the “cage-less” experience to be and as successful as the experience has been for my clients - I would never consider a cage dive as an option - and yet I am always aware of the potential risk that any client is exposed to in the “cage-less” environment.

I am acutely aware that we have managed all risk out of our lives and to me; “the cage” promotes this soulless experience. The connectivity to nature in a “cage-less” environment is a freedom of individual choice and in the case of many species of shark on our coast, the only way to experience them in their world and on their terms.

This experience is under threat from ill informed opinion and extractive abusers worldwide. Much of this justification for Jim and his chosen method of working with sharks will probably seem lame to many people but it is what it is. I do not ascribe to the bravado/machismo thing and have used my experience and that of the many thousands of people who have enjoyed South Africa’s shark product with me, to the positive benefit of sharks in South African waters.

I am indeed saddened by the loss of sharks from the coastal waters of South Africa and the world. I use my operations on our coast as an educational platform with the imperative of education through experience. The reality is that too few people care and those that do, like Jim, are faced with the difficult task of creating awareness and affecting change through experience in the face of ever decreasing shark populations.

In my case, I know of many people – both young and old - who were profoundly affected by their “cage-less” interactions with sharks on our coast and who have turned this into a platform for action: One of many such examples was Dr. Jon Cooper, who donated a very expensive camera system so that each client could go away with a complimentary set of images of themselves with the sharks of Shark Park. The collection of these images of the sharks has been archived for science and forms an integral part of the longest running tiger shark identification database in the world.

Another example is Arthur Limbouris, who owned the Quiksilver brand in South Africa. Arthur sponsored the first acoustic tags for the tiger sharks of Shark Park – a project that now receives phenomenal international funding from the Save Our Seas Foundation. Who would have believed that a surf brand would be at the forefront of shark research and conservation in South Africa?

In a recent case where a fisherman illegally killed three of the tiger sharks at Shark Park on a fateful Friday in February, a feisty servant of the sharks – Wolfgang Leander – stepped up to the plate and created so much international pressure that the government department responsible for South Africa’s Marine Living Resources is actually doing something to protect sharks.

Sharks need us… they don’t need the kind of people that Mr. Neal Watson represents – the cupboard love people, or the self enrichment gurus, the opportunists, or the extractive abusers… they need us. People like you and I, people like Jon Cooper, Arthur Limbouris, Wolfgang Leander… and people like Jim Abernethy.

We are not crackpots, adrenaline junkies or lunatics. We are family men. We are passionate about sharks and their environment. We care!

In the case of the Tiger Sharks of Shark Park I say… “No Bars - Just Stripes”.

Thank you Jim Abernethy for giving sharks a chance!

Posted by Wolfgang Leander at 13:26 0 comments 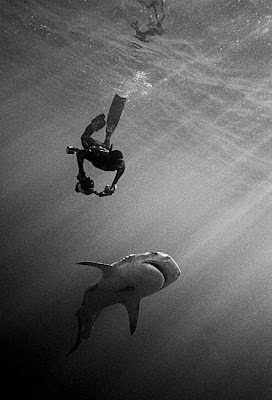 Please support the petition to save the sharks of Aliwal Shoal:

Finally, some good news amidst the 'shark attack' hysteria 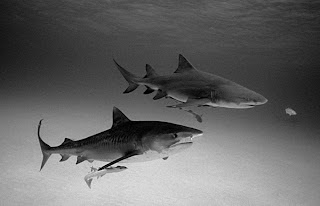 We are all very glad to see that the Bahamian government officials have kept their cool despite the misinformation and plain distortion of facts in the press that was fueled by self-styled shark experts such as Neal Watson and George Burgess.

Both gentlemen do not appear to have ever dived with tiger sharks or other 'dangerous' species, and certainly do not know the exact circumstances that led to the lamentable incident. Yet, their statements talking to the press smack of a specialist expertise they do not have. They are the know-it-all types media pros usually resort to not knowing better. I will not waste more words on Watson.

As to Burgess, who believes, and wants to make others believe, to be a "shark attack" expert, let me just quote an internationally renowned shark scientist:

"....... The study of 'shark attack' is an unscientific endeavor. This is because it is impossible with our state of technical knowledge to set up an experiment to test an hypothesis. Any statement as to causality is just mere speculation. This is a plain fact. The scientific method is not available to those who 'study' shark attack."

As much as Burgess wants to be recognized as an authority on "shark attacks", he is not more than a mere statistician who collects data on shark incidents. The conclusions he draws from his data collection are nothing but speculations as he simply cannot claim to do his research as director of the International Shark Attack File in a scientific manner.

Here is what Maris Kazmers had to say on the subject of being a "shark attack" expert:

Posted by Wolfgang Leander at 23:54 2 comments