Neal Watson, President of the Bahamas Divers' Association and owner of Undersea Adventures, has done it again: He used the recent fatal dive accident in the Bahamas (Tiger Beach) once more to blast the foreign competition  -   US live-aboards that take divers to Tiger Beach - to promote Bahamian shark diving operations which include his own.

Why does Mr.Watson have to go public and talk about "negligence" and "incompetence" on the part of the US shark operator, Jim Abernethy, when it hasn't been clearly established yet what caused the death of the diver?

Does Mr. Watson, undoubtedly a very experienced diver, not realize that whilst diving, with or without sharks, has become a perfectly safe sport / hobby, "shit can still happen" as bluntly stated by Mike Neumann in a related blog?

I know Jim Abernethy, and I know that he runs a very tight ship, literally. A bit too tight for me, to be honest, as he would not allow me to free-dive at Tiger Beach. Because of this restriction I never went diving with him.

I certainly don't wish Neal Watson a fatal accident on one of his trips, but I wonder how he would handle such a mishap...  But that is a moot question.

What really bugs me, though, is that Mr. Watson is now doing precisely what he vociferously accused other shark-dive operators, obviously all competitors of him,  of: 'Recklessly putting his guests' lives at risk' by diving cage-less with "potentially dangerous" sharks such as big hammerheads, lemon sharks (!!), and, of course, tiger sharks which in my (and many others') opinion are "potentially" no more dangerous than a well maintained car. Only Neal Watson knows what made him change his mind, and I don't want to speculate upon it, although it wouldn't surprise me at all that money, money, money was the motive to go cage-less so as to not lose the business to the competition. He must have recognized that nobody wants to be behind bars watching sharks, except when they  happen to be great whites.

I called Mr. Watson a "vulture"*)  when he maliciously tried to sink Jim Abernethy and his tiger shark operation after the most unfortunate Markus Groh accident back in early 2008.

I now appoint Neal Watson "King of Hypocrites" in the shark dive industry. However, despite my utter displeasure at his two-faced attitude, I wish him well  -   he is an old fart, and as such deserves some empathy from a fart his age.  :-)

Also, to be fair: Watson is probably sincere trying to establish some standard safety guidelines within the boundaries of the Bahamian waters. However, and to finish this here, I just can't escape the feeling that envy is the other, equally strong driving force behind his campaign against the gringo rivals.

You keep lashing out at Jim Abernethy - not only do you do the shark haters a huge favor but you discredit yourself and the association you preside over.

You would like to have others regard you as some sort of a diving "legend".

Well, let me tell you what you are: You are just an old vicious man without the slightest feeling for basic decency in a time when solidarity and compassion for both the vicitim`s relatives and your colleague Jim would be the appropiate behavior. Instead, you behave worse than a vulture. You maliciously feed the sensationalist press that is hungry for "Jaws" food.

Your classification of 'dangerous' sharks (Jim's sharks) versus 'safe' sharks (your sharks) is not only ludicrous, but shows quite clearly what your ulterior motives are.

Everybody in the trade suspects that you are using this most unfortunate incident to promote your shark operations with 'safe' Caribbean Reef Sharks while trying to eliminate a highly successful and internationally acclaimed competitor.

I was appalled at your published statements below:

"Most operators do a safe dive behind cages. But Abernathy, for whatever
reason, simply refused to comply with the safe diving practices in violation
of our standards in the Bahamas," said Watson, who operates a diving company
out of Fort Lauderdale.
It is tempting to offer a cageless option to customers: both the photographs
and personal experience would be enhanced. But the risks are too great,
Watson said.
"Him working with tiger sharks and bull sharks uncaged is totally
irresponsible and dangerous," he said. "It wasn't a matter of 'if,' it was a
matter of 'when.

Instead of expressing solidarity with the victim's relatives and your colleagues, you lash out at them callously and unsportingly, and seem to relish at the fact that this incident "proves" you right.

I know Jim Abernethy, and I can tell you that he is probably the most professional shark dive operator out there. His safety record has been flawless - until this last Sunday.

Now, we all know that shark diving is not entirely risk-free - what sport is? Skiing? Mountain-climbing? Bike-riding? Would anyone try to ban these activities because people can get injured or even die practising them?

You are a seasoned diver, as am I (I started diving back in 1955) - you should be a bit more relaxed. Stuart Cove has not had an accident, not that I know of, and he must have organized thousands of shark dives with Caribbean Reef Sharks in baited situations. So, Mr. Watson, what is your problem??

I have freedived both in Tiger Beach and Aliwal Shoal (South Africa) with tiger sharks - no cages. I have to say that I NEVER felt threatened by these magnificent creatures in any way. Now, you could say, why does an old fart like me (I am 67) freedive with tiger sharks? Well, that is what I love to do. And let me tell you: I am not a dare-devil; I just enjoy swimming with sharks as do countless other ocean enthusiasts.

I would never ever dive within the confinement of a cage, not with tiger sharks, not with whites sharks. I would not even scuba dive with sharks - I only freedive with them.

People should decide for themselves what they want to do. If they want to take risks - fine. But who are you to tell others what to do, and how to do it?

I have to ask you again: Why are you so much against cage-free shark diving? And why are you crusading against it? Many thousands of divers dive with sharks all over the world - the safety record is as high as it can be. Unfortunatley, Markus Groh got bitten and died from the wounds.

As much as we are saddened by this deplorable accident, we should neither demonize the sharks nor should we blame people like Jim Abernethy who have done more than most in introducing thousands and thousands of divers to the realm of the lords of the sea.

Whoever has the privilege to dive with sharks becomes a shark conservationist. Shark conservation is, to Jim, more than just a fashionable slogan: He has dedicated his life to it by taking people out to swim with sharks so they can feel closer to nature which is what shark diving is all about.

We are disconnected from nature, and sharks represent, in a way, the paradise we have lost a long time ago.

Posted by Wolfgang Leander at 17:10 0 comments

Is my Underwater Photography "Art"? 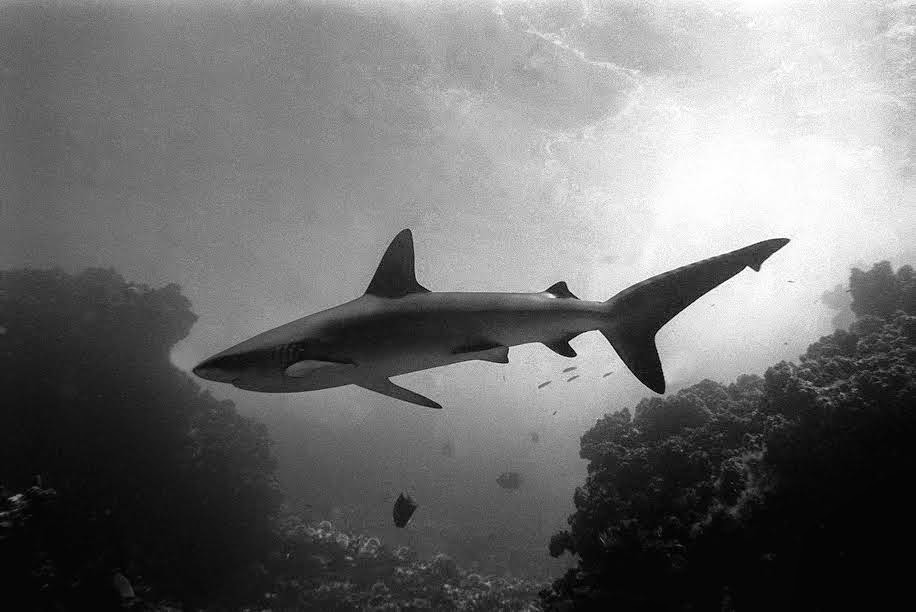 A craft, perhaps, but Ila France-Porcher considers my shark photography to be artistic.

I have to admit, false modesty aside, that I feel quite flattered by it, as I admire multi-talented Ila for being an accomplished author and a sensitive painter*), a very professional and competent non-academic shark ethologist, and, last not least, a deeply passionate shark lover and eloquent shark advocate.

So, having her review my work is indeed a much valued privilege, and it fills me with honor. I cannot say it any other way.

If you, dear Reader, haven't heard of Ila France-Porcher, you ought to know also that she is one of those rare shark people who have such a healthy ego that it doesn't have to be constantly pumped up like a cracked bicycle tire... She has neither an organization behind her, nor is she her own PR-manager; she is she, and doesn't need to be more than that.

Here is Ila's article as published in the latest international issue of the prestigious X-Ray-Magazine.

*) I have one of Ila's Tiger Shark paintings that captured the essence of tiger sharks far better than any of the best photographs of these incredibly expressive, strong, yet most gentle creatures I have ever seen - including my own images, of course...   :-)  :-) 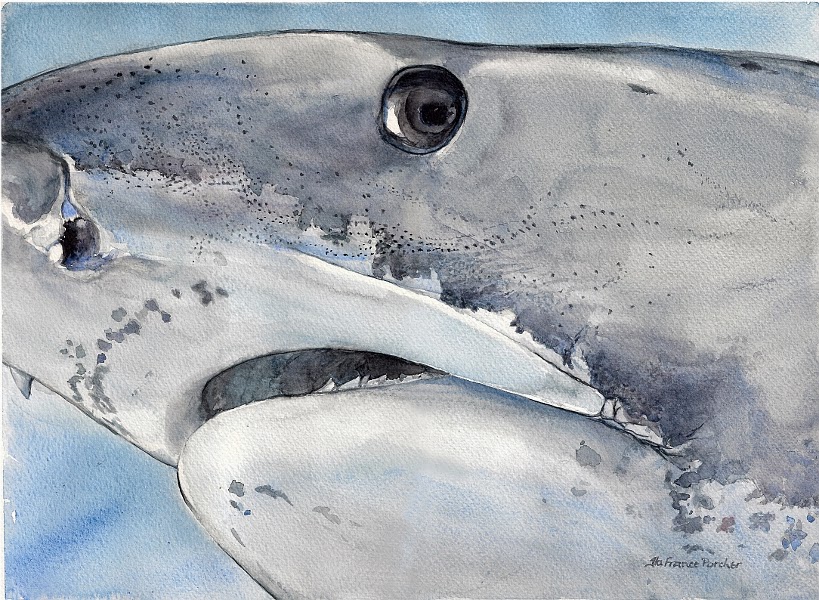 Posted by Wolfgang Leander at 07:31 8 comments