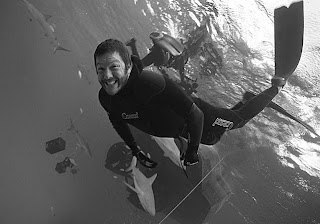 As you can see, Felix doesn't even need a mask to enjoy Tiger Beach!
Photo: Wolfgang Leander (2011)
Click to enlarge
For some reason, the pics in my blog "Tiger Beach revisited" could not be enlarged.

PhD Student David Shiffman of the University of Miami has been named a finalist in the 2011 blogging scholarship.

Should David win, it will provide him with $10,000 towards his doctoral dissertation research, focusing on the ecological importance of sharks to coral reefs. He will also use the money to support his lab's citizen science program, which has taken over 1,000 high school students and teachers into the field to learn about sharks and participate in an active research program.

If you are for sharks, which I am sure you are, please vote for David and his important research project. David is a very dedicated young scientist, and a passionate shark conservationist. He deserves to be supported.

All you have to do is vote for him no later than November 30, plain and simple. Here is the link.

Thank you.
Posted by Wolfgang Leander at 22:43 2 comments

This image is a "hammer". 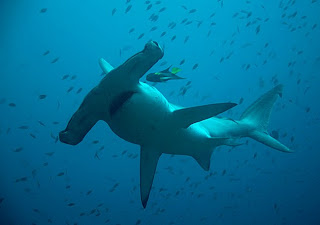 Click to enlarge
If we Germans find something truly amazing we say: "Das ist ein Hammer!"
Rob Allen took this photograph in Malpelo Island (Colombia). Although he is not a 'real' professional photographer, he is a true photographer extraordinaire. Here is Rob's website - have a look, and enjoy his work.
Rob is a fantastic guy, a very good and dependable comrade (he was a captain in the British Army). He is what I am not: Organized, disciplined, always determined to reach set goals.
I am happy and privileged to have met Rob almost four years ago where we both feel at home: Diving with tiger sharks.
Posted by Wolfgang Leander at 21:24 0 comments

It is always an emotional climax to go back to that magic place. I see the same individuals, and at times I feel they recognize me as well (you should know that sharks have a memory that goes back at least one year). 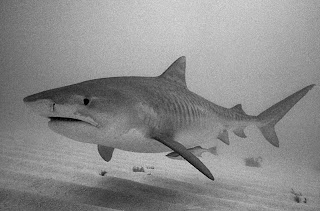 "Emma" with lots of tiger babies in her tummy!
Photo: Wolfgang Leander (2011)
Click on image

I was especially pleased to see a pregnant "Emma", and "Smiley", an incredibly gentle female tiger shark whose lower has been almost destroyed by recreational fishermen.

"Smiley" looks 'ugly' now, but to us who know her, she is the most beautiful striped girl with an unusually strong personality, not unlike the legendary "Scarface" of the Fiji Islands. 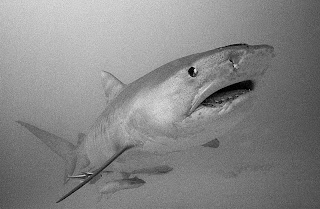 "Smiley" - intelligent and most gentle despite her new 'look'.
Photo: Wolfgang Leander (2011)
Click on image


The weather was not that great during the two weeks I was in the Bahamas but the underwater adventures we had when the visibility was good, and the people who joined us this time, more than compensated for the bad luck not to have had the usually excellent diving conditions at "the" beach.

I felt privileged to be around experienced shark divers and novices who were, as I could see and hear, as enthusiastic to mix with the shark crowd as 'yours truly':

Caro and Michel Lonfat, Isabel Muscat, Isabel Singer ("Bitsy" - not at all bitchy!! :-), my old young friend David Salama, Carsten and Ute, both from Frankfurt, grumpy but good-hearted Roy Kerr, Jupp, as always, this old aristocrat of genuine Westfalian stock who is an idealistic yet down-to-earth shark warrior, Rob Allen and his buddy Andrew, both very British in the very best sense of this qualification, professional photographer Will Allen (not related to Rob), Felix, who turned 35 during the trip but did not want me to announce it, Engracia Katsoufis with her contagious laughter, filmmaker David Ulloa, a talented horse and human whisperer, and, last not least, Robert Terpstra always so busy preparing his camera housing for the next dive that he sometimes missed the best part of the action... :-)

OK, enough said - I know that some of you, dear readers, want to see a few new pix. Here they are: 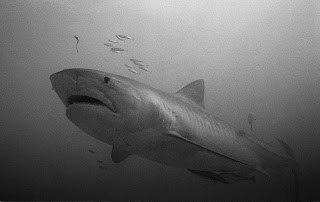 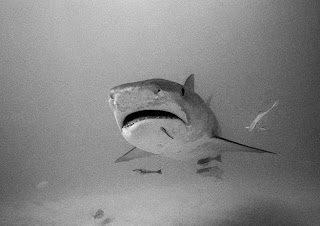 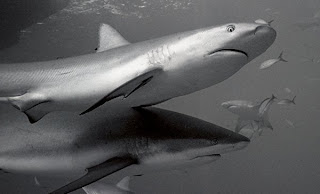 Isabel Muscat checking her camera to see whether she got a good shot of "Smiley".
Photo: Wolfgang Leander (2011)
Click on image 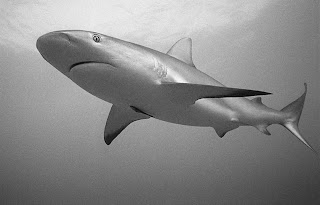 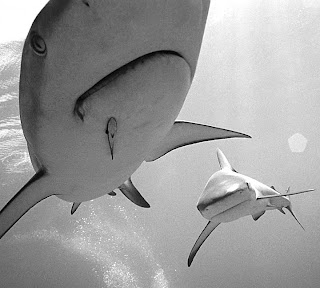 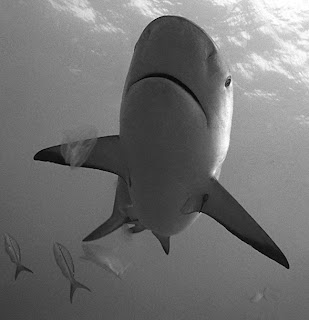 They ARE simply beautiful, aren't they?
Photos: Wolfgang Leander (2011)
Click on images

My next shark dive trip? It's still a secret but you'll know in due course....

Posted by Wolfgang Leander at 15:48 1 comments

Back from Tiger Beach - and already looking forward to my next trip....

What can I do? There is nothing I like better than diving and interacting with the local sharks. I am totally addicted to it, and I don't want to be cured, ever!! 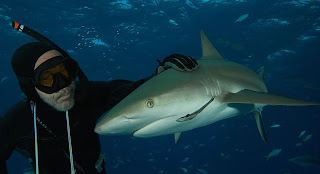 This reef shark could sense that I wasn't dangerous to her.
Photo: Michel Lonfat
Click on image 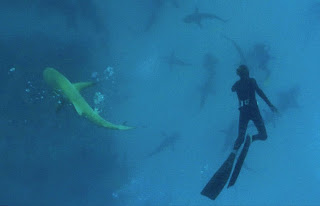 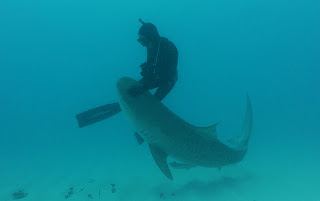 I just love this tiger girl, and she seems to like me, too!
Photo: Isabel Muscat
Click on image 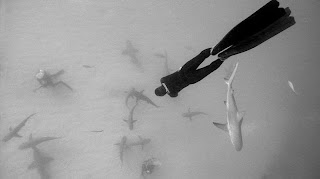 Felix - way more elegant than his old man (no wonder being half his age... :-)
Photo: David Ulloa
Click on image
Posted by Wolfgang Leander at 19:55 0 comments 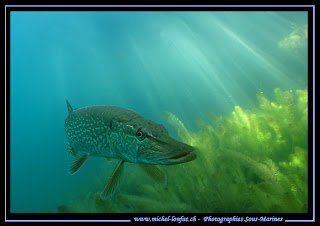 There is something for everyone - when it comes to photographers they usually have a preferred subject.  Up until recently I have never met anyone that focuses on Pike - that was until I met Michel.

Michel Lonfat is Swiss (French) and has been photographing Pike fish with a passion - and when he is not doing that he is exploring lakes in the Alps area, sometime hiking long distances with his gear to get there.

On our Tiger Beach trip - Michel was usually the first one in the water, this time capturing larger fish / sharks, and always ready to go.  He captured some great shots and I think has been converted to a shark diver.  I know that his wife Caroline has definitely become a shark diver.

Take a look at Michel's site - he is also actively involved in the Festi Sub.
Posted by Unknown at 18:40 1 comments

Ranting Bill Maher and the Wisdom of a Nobel Laureate.

I never heard of the guy before which, of course, doesn't mean anything. Yesterday I read about him in the latest "Newsweek" issue - and I immediately thought: "Man, this Bill Maher is some cool dude". Fiftyish, 100% politically incorrect, smokes marijuana publicly, born to an Irish-Catholic father and a Jewish mother, a strong sense for social justice, very self-assured.
Dig this:
On Religion
"Plain fact is, religion must die for mankind to live. The hour is getting late to be able to indulge in having key decisions made by religious people. By irrationalists. By those who would steer the ship of state not by a compass, but the equivalent of reading the entrails of a chicken."
On the Tea Party
"Now I want you teabaggers out there to understand one thing. While you idolize the Foundung Fathers and dress up like them and smell like them, I think it's pretty clear that the Founding Fathers would've hated your guts."
Since I had a long flight back home yesterday, I also bought the "TIME" magazine where I found another wise guy talking straight: Dr. Daniel Kahneman, a psychologist who won a Nobel in economics. In an interview he was asked on why people don't make rational choices.
One of the questions:
"What about experts? Shouldn't we trust their instincts?"
Kahneman's answer: "There are domains in which expertise is not possible. Stock picking is a good example. And in long-term political strategic forecasting, it's been shown that experts are just not better than a dice-throwing monkey."
As long as we have people like Maher and Kahneman, not everything is lost....
You all have a good week!
Wolfgang
Posted by Wolfgang Leander at 18:32 0 comments


Congratulations to Samantha Whitcraft and Neil Hammerschlag.  I know there were many others involved and it was a group effort (I just read Facebook and saw their posts ;) ).  And a shout out to the Florida Fish and Wildlife Conservation Commission.
Posted by Unknown at 18:29 0 comments

If this does not spike ratings I do not know what does.

NatGeo's Shark Attack Experiment features blond women wearing very little freediving in shark infested waters...what sort of experiment is this??? The only good thing I saw in the video was a new baiting system that has been implemented in SA after much resistance and public outcry. 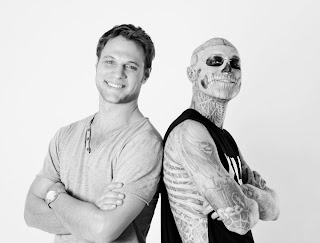 Will with Zombie Boy - FYI,Will is the one on the left

A week before coming out to the Bahamas, Will was photographing the human canvas above for an ad shoot.  I think I would rather come face-to-face with a Tiger shark than Zombie Boy, but as they say, never judge a book by it's cover.


Will Allen is a photographer / videographer based in Montreal, Canada.  He has a diverse portfolio ranging from beautiful women to beautiful sharks.  Productions have taken him all over the world, and he has been able to work on various IMAX movies including Rescue and Tahiti.


When I first met Will I thought he was going to be "that guy" - there is always "that guy" on a boat.  Was wrong, see first parahraph, second sentence - never judge...Turns out Will is a solid guy, unassuming, calm and funny.  Characteristics that are always refreshing and welcome in the shark world, in fact, would be nice to have more of.  No need for spotlight - his work and actions speak for themselves. 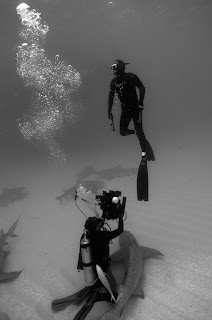 
I know there are some good photos coming from the Bahamas trip - very much looking forward to them.


In the meantime, visit his site www.willallenphoto.com


If you happen to be in Montreal - you will have to stop by his pub: www.burgundylion.com and have one of the many English beers and catch a football game...a real football game.

When words do not mean anything...

Mike has just written another great post on how we just cannot get enough sensationalism when it comes to sharks:

Enjoy the complete blog post.
Posted by Unknown at 19:36 0 comments

Just Embarrassing to be...

Thanks for find Shark Diver...
Posted by Unknown at 11:40 2 comments

Excellent post over on the Shark Diver blog about poor messaging execution.  While people's thoughts and intentions are often in the right place - their tactics are off (and in some cases even have a negative impact on what they are trying to accomplish).

"Conservation messaging needs to be done without the "stupid pet tricks with wildlife...We can do better than we are with smarter messaging that actually translates into conservation gold."

And there have been several fails:

"This is on par with, if not as moronic as, recent media hits that were meant to convey important conservation messages such as:1. Playing a guitar underwater while crooning to white sharks in a protected Bio Sphere Reserve. The message was, "white sharks are not dangerous." Since that video there have been 6 fatal white shark attacks and 11 non fatal predatory events on surfers and divers worldwide.2. Holding up pizza box lids with lip stick on them to convey complex messaging about shark nets in South Africa. Since that media image over 2000+ sharks have been killed in shark nets all over the world."

Enjoy the complete post.
Posted by Unknown at 09:05 0 comments