Yesterday I went diving a few miles off South Beach with some friends with the intent to get dinner - I was not expecting any sort of decent visibility from previous trips or any decent size fish for that matter.  But as luck would have it, we had both.


We dove a wreck and a cemetery, but it was not until the last location that we would find our last keeper and an hour and a half ordeal to get the grouper out of the hole he was in.  While I was not hitting anything, Manuel clearly had it aim on - but to get the fish out or part of it was a complete team effort.  The fish was wedged in a hole about 45FT deep and in the end we basically had to fillet the fish underwater to get it out - but it was worth it.


Oddly enough, no sharks came by, not even a nurse...how disappointing.


Regardless it was a fun and exhausting day - and the snappers last night that we prepared on the BBQ were well worth the workout...
Posted by Unknown at 10:55 3 comments

Well, what looked like an uphill battle in the beginning of our fight against one of the world's largest online traders / brokers - the Chinese Alibaba Group - has now turned into a major achievement as it is not only about shark fins which was our casus belli but also ivory and sea turtles.
Click here to read what was published a few days ago.

We discovered Alibaba's involvement in the extremely lucrative international shark fin trade late in 2006, and then initiated, together with the active and committed support of Richard Stewart of the Ocean Realm Society and Marie Levine of the Shark Research Institute, a massive campaign to induce Alibaba to stop facilitating the highly controversial, often illegal shark fin trade.
Later, countless other individuals, including David McGuire and Patric Douglas, to name just two, and conservationist organizations from all over the world such as The Sea Shepherd (USA), Jupp von Kerckerinck's Shark Protect (Germany), Shark Project (Germany / Austria), Benthic (Canada), Shark Savers (USA/South Africa) joined forces.
I remember writing the PR people of Alibaba a note that included something along these lines: "What has started as a light breeze of indignation and protest against your business practice will soon grow into a full blown hurricane of bad press for you."

Although we sometimes felt frustrated, even discouraged, to carry on our fight against Alibaba and its major shareholder, Yahoo!, we never really gave up - and let the Alibaba executives know that we wouldn't.

Indeed, we did not mince words and kept reminding them of our intent.

Dr. Brian Darvell, a professor at the Hong Kong University, and a passionate and very articulate shark conservationist, managed to get Alibaba CEO Jack Ma's attention at a public meeting, and later established a personal contact with a key Alibaba manager.

The conversations Brian had with this gentleman were decisive and eventually led to the last chapter of what seemed to be a never ending story - Alibaba's decision to ban the trading of shark fins through their internet portal (January 2009).

Alibaba.com seem to have become an environment oriented enterprise - very much to their credit.

The moral of the tale is straight and simple: If you are like most individuals are, that is: basically quite insignificant, replaceable, and powerless, but still want to change the world, do not hesitate - go for it. However, don't think big; think small, be patient, be perseverant, and, most importantly, don't give up.

Posted by Wolfgang Leander at 21:49 1 comments

A message from Lesley Rochat founder of AOCA (please sign the petition at end):
"Hello Everyone,

I have been running a petition for the protection of a number of shark species in South Africa and getting ready to submit it. Our fishery department is in the process of revising the National Plan of Action for the conservation and management of our sharks, a document drafted in 2000 and subsequently referred to as the National Plan of INaction. It is therefore important for us to get this petition in shortly.

I am trying to get a last boost of signatures and will appreciate your help. So far we have about 5000 signatures but of course more would be better. Please sign it if you have not already and then send it to as many people as possible, your support will be greatly appreciated.

Cap Cod seems to have been host to one or more white sharks yesterday.  Video was caught of what clearly looks like a white shark right off the beaches.
Or was this just a Discovery Channel marketing scheme ;)
Posted by Unknown at 10:23 4 comments

Would YOU like to dance with Bahamian Tiger Shark girls?.... 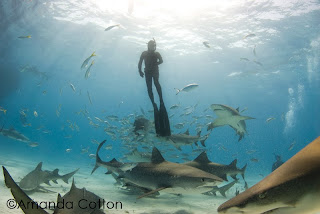 ........ then you should join the Leanders, Felix and the Wolf, on one of the forthcoming trips to Tiger Beach.

The live aboard is the "Dolphin Dream", a comfortable and spacious dive vessel owned and operated by Captain Scott Smith.

Look forward to being pampered by the cook on board the "Dolphin Dream", Gale. She is Scott's sister-in-law - and her food is so delicious that if you don't look after yourself, you'll be a few pounds heavier once we head back to Palm Beach... :-)

I will be the shark dive guide, and I can assure you that diving with tigers and lemons is an elevating experience you will never forget. It has changed my life since I did it for the first time.

Posted by Wolfgang Leander at 19:29 0 comments