Check out the surfers towards end...CLUELESS


Update - photo above may actually be a Dolphin as per Luke Tipple.
Posted by Unknown at 09:51 0 comments

.... I have written several posts about my new old-age love Wolfie, a blog about my father. Have I perhaps overlooked my son? 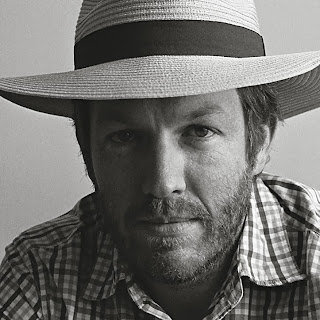 How could I ??? Look at this young man - he is the very best son a sensible father could wish for, by far....

Maybe I took Felix for granted since he and Carmen made me an "Opa", but he was, is, always close to me.

I think about him EVERY single day which isn't surprising. When Felix was born a little over 37 years ago I immediately knew that he was the very purpose of my life. I didn't have to philosophize anymore. That doesn't mean that I don't enjoy thinking about death, and thus preparing to die, which is, according to Michel de Montaigne, the essence of philosophy...  :-)

Felix was the sun and the center of my private universe that gave me the raison d'etre, but also warmth and an existential joy that was never interrupted, not even  by  the slightest hint of a feeling of becoming sated with the role of a parent.

Simply by being there, Felix illuminated my often stony path during the many years that have since gone by.

I know that Felix feels the same when Wolfie entered his life. As I observe him interacting with Wolfie, my heart and my eyes overflow, and I could drown in an ocean of tenderness. It reminds me of the precious times I spent with Felix when he was Wolfie's age.

Again, why should I, a passionate image maker, try to look for adequate words when you could see, literally, what I mean? 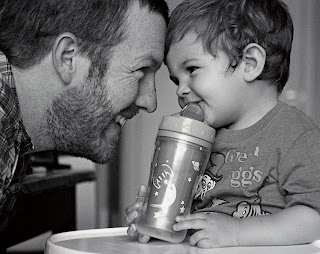 Posted by Wolfgang Leander at 17:45 1 comments

Love in the Autumn of Life.

It's hard to adequately describe how much in love an old fart like me can be at the last stage of his life... In such cases, as the well-known Chinese proverb goes, an image will say it all.

Now, I ask you, dear reader, when you look at this picture: Is it not impossible not to be madly in love with this little "Mensch" who happens to be my one and only grand-child??... Posted by Wolfgang Leander at 15:32 0 comments

Yearning for my father - or: The dates I will never forget.

Even now, as a grand-father, I miss my father, no less than back then when my mother called me to say she had 'bad news' for me...

It is not too long ago, perhaps 20 years or so, that I realized that, deep down, I have never left my childhood, and that I will always remain my father's little boy who looked up to him, loved him, and felt secure and protected in his presence.

Yet, our relationship was not always harmonious, not even when I was a small kid.

My father was not a children's father; children had few rights in his traditional world-view, and what mattered most to him was that they had to behave, be obedient and well-mannered, make a bow or curtsey to grown-ups, and never challenge in any way the authority of parents and teachers.

Given his education and background, my father felt Prussian to the bone. He was raised in Wilhelmine Berlin by a father who was a staunch monarchist and who believed in unconditional loyalty to the fatherland, discipline, modesty, frugality - virtues that marked my father for life. 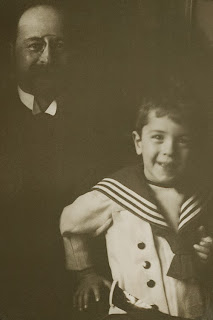 Little Wolfgang Julius with his father, Alexander Leander (Berlin, circa 1911)

It was, thus, absolutely normal that my father considered corporal punishment as a reliable and effective educational method. So, yes, I got spanked when my father, and my mother, thought a wrongdoing had to be corrected.

Obviously, being hit by a strong hand on my butt hurt me, and the utter helplessness that went with it touched deep layers of my soul. However, I won't forget that my father once told me, quite moved, that spanking me caused him much pain - an admission I then felt was sincere.

As much as my father wanted to give the impression of being 'tough' and what he thought to be 'manly', he was a sensitive and vulnerable human being who would not harm a fly. Hunting was to him, for example, a most brutal and senseless 'sport'. He accepted my spear-fishing because he probably thought that fish feel no pain.

My adolescence put a strain on our relationship which is what what typifies any father-son bond, no matter how close.

Yet, compared to most of my German friends who had seemingly insurmountable problems communicating with their fathers in an open manner, which was quite common in those days, I felt privileged to have a dad with whom I could discuss just about everything that went through the mind of a 15 year old youngster reaching puberty, and who was beginning to be intrigued about the metaphysical mysteries of our existence.

I could even entrust my dad with the most private emotional and sexual anxieties which, as I remember, could be overpowering occasionally. There was no subject that was taboo for me to talk about and seek his always comforting advice. In that respect, my father was a wonderful father. His compassionate understanding for human imperfections more than out-weighed his own short-comings.

I was 23 when my father died, and although I did not believe in God, not even then, I somehow hoped for a reunion in an after-life. That won't happen, as I now know. But I will carry the memory of my young old man alive in my heart until its last beat.

And I will keep missing him beyond....

Posted by Wolfgang Leander at 12:59 3 comments 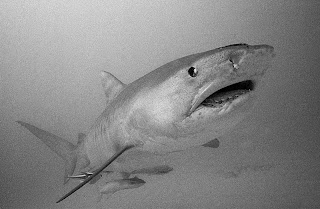 With about 10-11 ft in length, she might not be fully grown but she is definitely an adult tiger shark who commands respect; she is serene and inquisitive; and above all she is most graceful, beautiful, and absolutely lovable.

When she looks at you, as she does in the above image, you will be completely mesmerized by her striking facial expression. She has what we call in German a "Charakterkopf" (literally: 'character head').

It is impossible not to recognize her because her lower jaw has been disfigured while on an angler's hook. 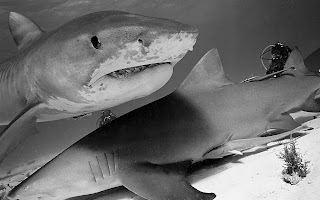 It is also hardly impossible not to meet "Smiley" at her beach. As soon as a dive boat anchors in the Tiger Beach area, you could almost bet that she will be on the spot sooner or later, mostly sooner. This year, I haven't missed her not even one single day. 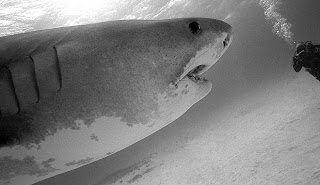 I met "Smiley" back in November 2008 for the first time when she looked pretty much like any other female tiger shark. It was, however, not difficult to identify her even then  by the prominent dark spots on her belly and the inside of her pectoral fins. 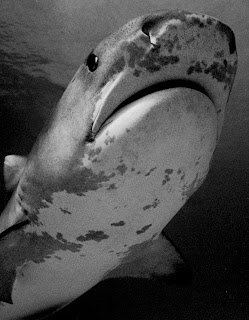 You could tell that "Smiley" was quite confident in the presence of divers. She never displayed any type of boldness, let alone aggressiveness. She was what tiger sharks generally are: Curious and gentle. When I say 'curious' I don't mean what a lot of even so-called experienced shark divers stupidly claim, namely that sharks always look at you to check out "whether you are prey". 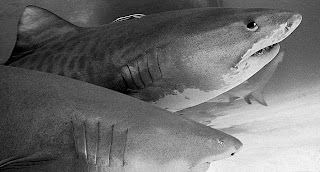 The first year after she was hooked and mutilated in the process, "Smiley"  was extremely wary of divers - as if she related her trauma to humans. Fortunately, she eventually regained her confidence in divers. Her being hand-fed by the crew members of the "Dolphin Dream" might have also contributed to winning back her trust in 'humanity', as it were... 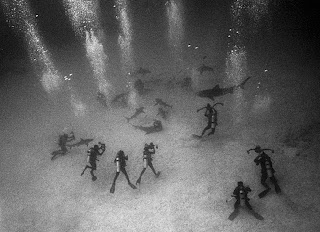 The large shark in the upper right side is "Smiley" approaching one of the hand-feeders.

Who knows, "Smiley" might be related to famous "Emma" -  I wouldn't be surprised as both dignified ladies have a lot in common. What I can say with certainty, though, is that "Smiley" is definitely on her way to becoming the new star of Tiger Beach.

This is not the first time I wrote about "Smiley" - have a look at the blog I posted back in November 2011.

At any rate, this is a propitious opportunity to wish "Smiley" and "Emma", and all their relatives and friends, a long and happy shark life.


Here are a few images of "Smiley" taken before she got that distinguishing smile on her face.... 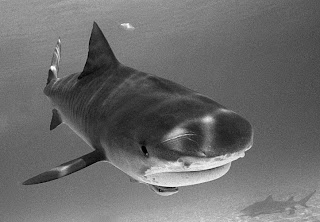 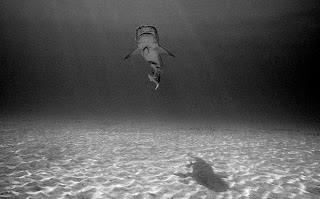 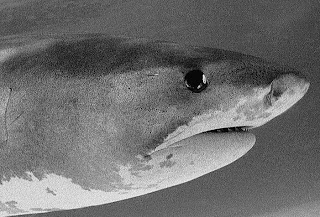 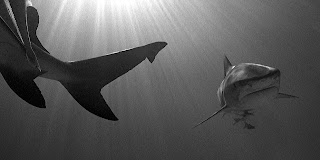 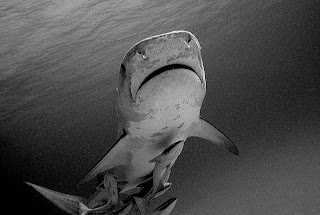 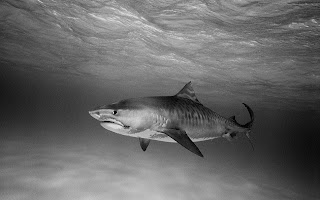 All photographs by Wolfgang Leander

Posted by Wolfgang Leander at 09:28 1 comments