Living without a stomach for almost three years now. 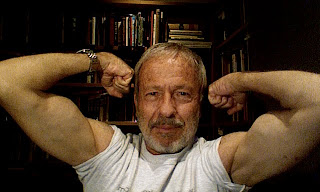 It has been quite an ordeal; and yet, I am alive.

Many people around us, acquaintances, good friends, my sister Erica, have died of cancer during the last three years. So, I should be grateful for still going, though not as strong as I used to.

I have lost a lot of weight, and it seems impossible to regain it. Digesting without a stomach is a problem; my diet is quite balanced and very healthy (carbs, protein, vegetables, fruit, grains, pasta) - not only that: Instead of just drinking whole milk, I add 50% of cream, sometimes I even drink pure cream: Yummie!! But all this doesn't help.

I wasn't able to put on even 100 g since I kissed my stomach good-bye. If I eat something that is not right at any given moment, I have to "return" it in order not to endure the pain in my guts. 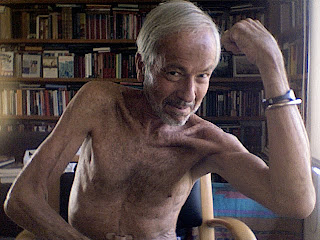 This three year long experience made me realize that the stomach is probably the most important organ - or so it feels not having one. (OK, some will say: The heart and the brain are more important. I agree with the heart part - but the brain? Look around, and you'll see how many humans can happily do without it... :-).

Anyway, some essential nutrients can only be absorbed by the stomach, and as the German pun goes: "Man ist, was man isst." (= You are what you eat.). So now I am what I am able to absorb.

However, as I said - no complaints; others fare much worse.

Even though I am rather weak, I can still free-dive with my beloved sharks, and I am, so far, strong enough to lift my little Wolfie without overexerting myself. These are good enough reasons for me to celebrate life.

Posted by Wolfgang Leander at 13:48 3 comments

No, I am not going to bitch about ABC 4 this time.... :-)
Quite the contrary.
What I have seen today in Mike Neumann's blog, a sample of ABC4's talent as a wildlife cinematographer, simply left me breathless. It ranks among the very best I have ever seen. Just incredible!!

Does a pro like ABC4 have to sell his outstanding talent to Shark Week and the like? Definitely not!
What he should do instead is produce a film about sharks, aim as high as he can, make absolutely no compromises, and get back with the most outstanding shark documentary ever done. From what I have seen in the clip above he could do it. ABC4 does not need the hype and the shark pornography to market his art.
Andy - you can see how easy it is to convince an old not so 'glorious basterd' that he is still educable and also capable of changing what to some might look like a high opinion of himself... :-) :-)
Posted by Wolfgang Leander at 09:43 0 comments

Mike is a good friend of mine, so are some people he has mentioned in part two of his review of 2011, and who certainly won't like Mike's incisive observations. In those specific cases I cannot but be impartial.

Apart from that, Mike and I do not always agree on everything - how could we?

What I fully share with Mike, however, is his almost visceral aversion against BS. Thus, when we see something we don't like for BS reasons, we open our mouths rather than keep silent in order to be "Messrs. Nice Guys".

We are not "politically correct", and as far as I am concerned, I despise this new form of diplomacy which is often aimed at converting plain, smelly BS into some sort of odorless bull crap.

Some will say (I know who they will be.... :-): "Why do these guys feel they have to pick on other shark defenders? Why can't they just be tolerant and focus on the 'larger' issues?" Simple - because as in all other human activities, including organzations with common interests such as movie star fan clubs, there are always diverging opinions that should be questioned, debated, criticized.

A critical mind cannot be equated with being negative or destructive which is something I hear once in a while from some of the hypocritical shark "conservationists" out there.

In extreme cases I get reprimanded in the most subtle of ways.

As, for instance, by a youngster who found it appropriate to call me "a seemingly bored mother fucker" who should get a life rather than bad-mouthing other people who DO THINGS, like his newly found friend, shark pornographer extraordinaire ABC4, and other such professional and ad honorem "Shark Angels"... :-)

Anyway, enjoy Mike's blog. In literary terms it is an award winning piece of writing, as are all his postings. I would rank Mike, along with his choice of Patric Douglas, as the best 2011 shark blog writer, by far.

Posted by Wolfgang Leander at 13:32 2 comments