Mark "the Shark" - an American psychopath. 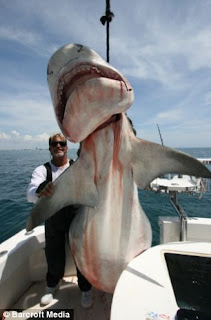 Bravo!! What a macho man you are!! 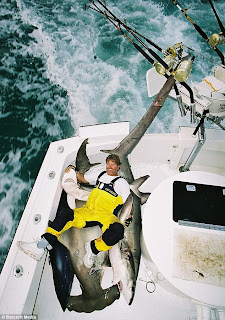 The images and the article say it all - what else could I add? That this eco-pervert is a disgrace? That he personifies what has become to be known as the "ugly American"? That killing two pregnant tiger sharks with 90 pups in their bellies isn't "cool" but an outright crime?

Read the article, and disseminate it among friends and acquaintances.

The AP reporter must have been given a free ride on the boat; in return he gave Mark "the Shark" a free advertisement ride. Shame on both!!

Posted by Wolfgang Leander at 01:40 2 comments 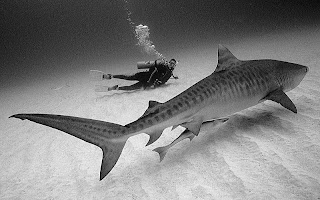 Tiger Beach: Best underwater beach to bum around - by far!!!
Photo: Wolfgang Leander (2009); the diver is Lyn Nelson, also a qualified TB beach bum - :-)
....I will, and I understand that Dom Macan of DiveAdvice has still three open spots on the forthcoming trips aboard the spacious "Dolphin Dream" (Oct 30 - Nov 5 and Nov 6 - 13).
As much as I am addicted to the tiger sharks of Tiger Beach, these two trips might be my last ones in the foreseeable future. *)
So, if you think that this is a chance to join a "professional" Tiger Beach bum, click here to get in touch with Dom.
Whoever you are, it would be nice to see ya "out there".
Wolf
*) Next year I will have a more traditional dive vacation to introduce my grand-son Wolfie to the marvels of the Bahamian undersea world (never too early to do that; I taught Felix to freedive before he could walk, also in the Bahamas).
And 2013? How could I plan that far ahead? In my age?!? No way, "Hosay" (= Jose)!!...
Posted by Wolfgang Leander at 18:14 0 comments 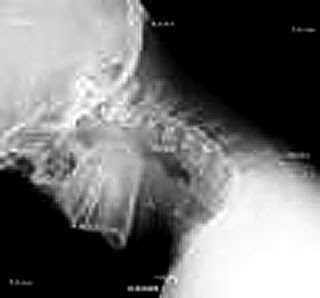 ... fittingly, by the X-Ray Magazine.

Posted by Wolfgang Leander at 20:15 2 comments

Tiger sharks of Aliwal Shoal: Where have they gone?.... 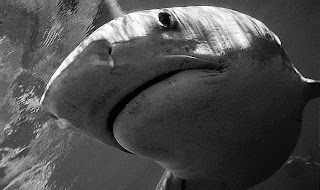 Aliwal Shoal tiger shark
Photo: Wolfgang Leander (2008)
Click to enlarge
William Winram is a world champion freediver who, in the past, had teamed up with a shark dive operator in South Africa to offer, along with Fred Buyle, freediving courses with the most attractive bonus of practicing going down on one breath of air among tiger sharks. 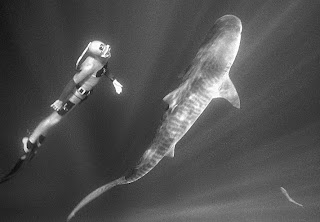 William Winram swimming with a tiger shark
Photo: Felix Leander (2008)
Click to enlarge
This is what William wrote me today:
"Very sad the state of things in South Africa..not a single Tiger sighted when Fred Buyle was there and I have not heard of anyone else that has taken a trip there seeing any either...very, very sad. Seems there are collectors paying top dollars for the jaws of big predators and I am guessing with everything else it is just too much pressure for a species like that to survive."
Much to my chagrin, it now appears that I was probably right in assuming that the poaching in the Kwazulu Natal area, in addition to the devastating effects of the shark nets along the Scottburgh beaches, and elsewhere, have taken their bloody toll, heavily.
I witnessed the gradual decline of tiger shark sightings between 2007 and 2010. Instead of getting to the bottom of this, and trying to find out why this was happening, some of the shark dive operators, the one I was with, for example, preferred to speculate outwardly about such simplistic and very unconvincing reasons as currents, winds, water temperatures. They knew, or must have known, the real causes for the drastic dwindling of the tiger populations in the KZN area but preferred to do nothing serious about it.
Too bad the majority of the shark dive operators, some of them self-styled conservationists, and all those shark activists in South Africa did not want to address the problem collectively and aggressively. Most of them, so I was told, were cooking their own soups, trying to work "behind the scenes", rather than uniting resolutely, and leaving their ego issues and personal agendas aside, if only for once...
Have these people ever considered contacting the PEW organization which was instrumental in advising the Bahamian government to enact a ban on all shark fishing activities, both commercial and recreational, in the vast archipelago? One individual did but she had no peer support.
I cannot escape the feeling that there is a considerable element of parochialism in the South African society that seems to be an ugly legacy of its not so glorious past...
A notable exception fighting for the survival of the sharks in South Africa is Lesley Rochat. But she faces precisely the obstacles I just mentioned making it very difficult for her to move forward effectively.
The shark dive operators in the Umkomaas / Scottburgh area should make no mistake: The ONLY attraction of Aliwal Shoal are (or should I say: were) the tiger sharks, and, to a lesser extent, the black-tip sharks - everything else, the average visibility, the variety of fish species, what little corals you find there, are not spectacular enough to compete with other international dive destinations. 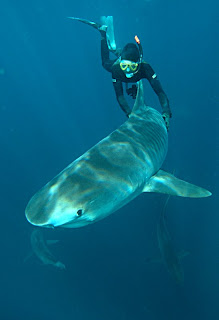 Interacting with a tiger shark in Aliwal Shoal
Photo: Roger Horrocks (2007)
Click to enlarge
I had absolutely fantastic tiger shark encounters in Aliwal Shoal, and I have spent some of my very best and most exciting dives of my live in that spot.
It literally hurts me to imagine that the beautiful, incredibly gentle tigers I met there, all adult females, are gone, most likely killed for either their fins, their low value meat, or their jaws.
This is a major tragedy I cannot fully fathom yet...
Posted by Wolfgang Leander at 09:25 0 comments