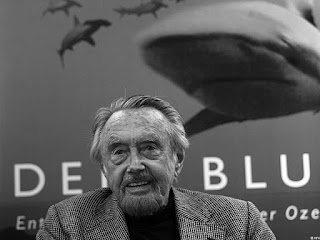 A few days ago I read that Hans Hass died on June 16, 2013.  As if I had a premonition about one week before his death I thought about him, and what he meant to me. Looking back at my "career" as a skin-diver / free-diver, I owe him my life-long passion for the ocean and its most fascinating creatures: Sharks.

Hans Hass was the first diver to swim with sharks and study their behavior. He saw them in the Caribbean (Bonaire, 1939) for the first time while spear-fishing. Bold as he and his diving buddies Alfred von Wurzian and Joerg Boehler were, they would see sharks, mostly Caribbean reef sharks, regularly as soon as they had a fish on their primitive pole-spears.

I have to explain: These 2m long wooden spears had no propulsion devices such as rubbers, springs or compressed air but had to be thrusted by hand - now, THAT was a chivalrous way to hunt, quite unlike today's spearos who use extremely powerful spear-guns which give the fish hardly any chance to avoid being impaled. 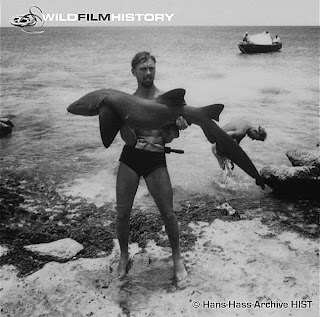 Hans Hass with a speared nurse shark (Bonaire, 1939). Now, wait a second, and don't get upset!! - virtually all divers who started to dive in the forties and fifties were enthusiastic spear-fishermen, and they hunted, me included, everything that moved. Back then, the words "ecology" and "environment" were unknown...  :-)

I was eleven years old when my father gave me the book Hans Hass wrote about his Caribbean diving adventures in 1939, "Unter Korallen und Haien" ("Among Corals and Sharks"). I still have the book, and it gives me much nostalgic pleasure to leaf through it once in a while, and marvel at the photographs. At that time, not being too critical as far as literature was concerned, I thought Hans Hass was a brilliant story-teller; later, as an adult, I realized that while he had an astonishingly charismatic personality, he wasn't such a gifted writer.

With his incredible underwater stories, especially the ones about the awesome encounters he had with sharks, and his fantastic black + white photographs taken with an semi-automatic Robot 24x24 mm which was protected by a very basic housing he made himself with the help of a mechanic,  Hans Hass was able to captivate not just a few youngsters but a whole generation of adventure-minded youths in Germany, Austria, and beyond.

To countless adolescents, Hans Hass was their larger than life hero; he certainly was mine. He was the diving pioneer who introduced us all to the hitherto unknown wonders of the underwater world.

That was, in my opinion, his most impressive achievement in life.

In the late forties, early fifties, the dashing Hans Hass and his beautiful wife Lotte began to dive with rebreathers and tanks. Strangely, that did not appeal to me, and as a I grew older, the boundless admiration I felt for him sort of slowly faded away. I was not really interested in the researcher he eventually became as it was the spear-fishing free-diver and intrepid shark-man who lit my fire, as it were. 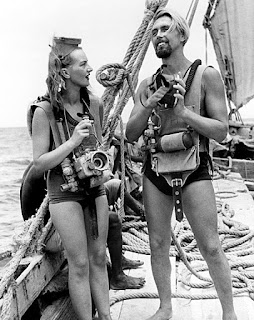 In contrast, Jacques-Yves Cousteau never attracted me the way Hans Hass did - perhaps I sensed that Hans Hass' French "competitor" seemed to be a very authoritarian, self-centered and vain individual, unlike the youthful and stunningly handsome Hans Hass who was what you would call a friendly buddy with the heart in the right place.

As I stated before, it was the young Hans Hass who ignited my passion for free-diving which is still as burning as it was back in 1955 when I donned an oval mask and duck-feet looking fins for the first time in my life.

For that I am, and will always be, deeply grateful to this truly remarkable man.


Posted by Wolfgang Leander at 14:12 3 comments