Diving with Tigers on 'their' beach in the Bahamas - truly an extreme adventure. 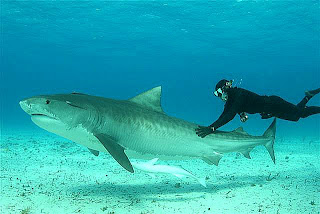 My friend Dominick Macan of DiveAdvice has organized a Tiger Shark trip aboard the fabulous Dolphin Dream to Tiger Beach from November 9 to 15, 2008, and has asked me to be the shark dive guide.

Did I hesitate to comply with his request? Well, yes and no.

'Yes' because I am not a professional dive guide, and 'no' because I am a shark diver to the bone marrow. With all due modesty, I feel perfectly confident that I will be able handle the "job".

As a reader of this blogspot you will know that I consider Tiger Beach in the Bahamas and Aliwal Shoal in South Africa to be, by far, the best dive spots for close shark interaction.

It will, thus, not surprise you that these are the two places you will find me swimming and playing with the striped beauties for many years to come - God willing, that is.

No other spots to 'discover', no more experiments, and disappointments, in faraway destinations: Bahamian and South African tiger sharks - that's it for me. I will never tire of the incredible privilege to dive with these majestic creatures.

There aren't too many around anymore. In the last three decades the tiger shark populations have been decimated by a staggering 90% - world-wide. And it's not because of their meat. It's mainly because of their much sought after fins to satisfy the obscenely voracious appetite of the Chinese and other east Asians for shark fin soup. So-called sport anglers kill tiger sharks mercilessly so they can pose next to their victims, and for their jaws, almost as 'valuable' as the jaws of white sharks.

Tragic, but that is another story...

So, anyway, do you feel like joining me and some very, very cool people on this trip?

Dominick has ONE SPACE LEFT - if you have the time (and a little cash in your piggy bank :-), don't hesitate. The last spot always sells quickly. Send Dom a note - dom@diveadvice.com - and ask him to mail you the details of this extreme diving adventure.
Posted by Wolfgang Leander at 22:39