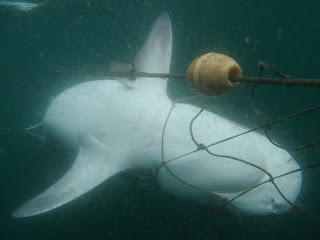 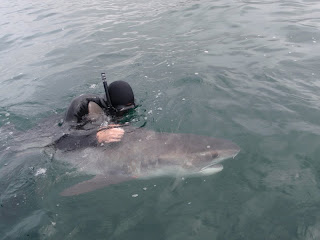 This is the second assault on the tiger sharks of Aliwal Shoal in 2008. The sad news I received today ruined much more than just my day.

Today was a tragic day for the tiger sharks in the Aliwal Shoal Marine Protected Area. Two animals were killed in the shark nets at Scottburgh this morning and we were able to free another little girl later in the day.

I felt sick (literally), devastated, sad, and outraged beyond description.

The diver who rescued the small tiger girl, and lovingly holds on to her, is Steve Benjamin, a young marine biologist who works as a shark guide at Blue Wilderness. This is, by far, the most tender and telling 'man-shark' photograph I have ever seen.

The image could be the poster for the forthcoming "Year of the Shark 2009".

Steve: We all embrace and applaud you for having saved this little girl. You are a gentleman in the true sense of the word - a gentle man!

We will have to launch a massive, well coordinated initiative with all means we have at our disposal to have the South African authorities remove the shark nets in their territory. This issue is long overdue, and now is the time to ACT decisively!
We need to let the world know that to protect the tiger sharks of Aliwal Shoal is a just cause - it will be the fight of the concerned few against the indifference of the many. No more, no less.

Let our motto be:

"Shark nets: We don't need the nets - we need the sharks!

Posted by Wolfgang Leander at 23:21

Hello
I also felt sad about that...
deep sea water