From Russia with Love.

Filip M., a 22-year old native of Serbia who spent most of his life in Moscow, is a brillant kid: He is absolutely tri-lingual, resourceful, with a knack for music, a very gifted writer, hard-working, and, above all, he has a head full of ideas.

That is really all I can say about him.

What? You say 'that's all'? Well, now wait a minute. There aren't too many older folks about whom I could state so many distinctive characteristics!

Again, Filip is only 22, and as you can see he looks like a teenager.... :-) This young professional will make himself heard widely as he matures, trust me. 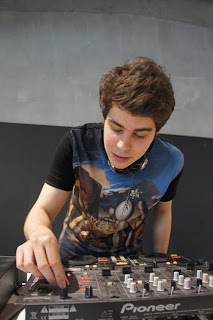 Filip working as a DJ for fun
Filip is the founder and the chief-editor of a Russian life-style magazine ("TeleScope"). He approached me right after the notorious shark attacks in the Red Sea to interview me for a feature about sharks.

For those of you who don't speak Russian Filip made an English translation of the introduction and the interview:


The Jaws of Love

The Internet is a truly incredible medium. Sometimes, while being in search for something, you accidentally run into unexpected resources. This article is dedicated to exactly that kind of discovery, which turned into quite an unusual article for our magazine.

In light of the recent shark attacks on tourists in Egypt, I was looking for more details about those incidents. Sharks had always been one of my biggest fears, so this kind of events interest me a lot. While searching for images, I accidentally stumbled upon a blog called Oceanic Dreams.

Apart from a huge amount of articles on the life of sharks, I have discovered grainy black and white photos of extraordinary beauty. This was not just a descent into an underwater world, it was more like shifting into an alien dimension never before presented to the human eye - mystical shots from the life of animals which many of us see in their worst nightmares.

On these photos of indescribable beauty, before me appeared tiger sharks of such sizes that weren’t even named in many encyclopedias. After some time a question came up in my head: “Who is this madman that comes so close and so often to these ocean dwellers?”

The captions under the photographs led me to their author. Wolfgang Leander, a 70-year old Bolivian of German descent, regularly does what most shark experts can only dream about.

For many years Wolfgang has not only swam very close with sharks, but has also been interacting with them as if he was at a dolphinarium. The sharks have learned to trust him, letting Wolfgang capture breathtaking photos from their lives.

Not only that he spends time underwater with these creatures so calmly, he also does it without scuba diving equipment. Leander is the only freediver who is allowed to dive with the tiger sharks of the Bahamas.

Instead of using heavy professional underwater equipment, he prefers to feel one with the ocean, trying not to stand out too much in this underwater realm of sharks. When you learn what kind of equipment he uses for photographing, his work seems even more incredible.

Wolfgang’s love for sharks made him their devoted protector. Together with his son Felix, he regularly leads underwater excursions into the world of tiger sharks of the Bahamas.

He considers sharks to be one of the least understood marine animals. His mission has become to oppose ignorant TV-producers and journalists who present sharks as dangerous man-eaters, including Discovery channel, whose shows he had labelled as “shark pornography”. In their Oceanic Dreams blog, father and son display to the readers a world of sharks as few have seen it.

Shark defenders like Wolfgang are of the opinion that it’s sharks who need to be protected from humans and not the other way around.

Filip: How long have you been diving with sharks? Why did you decide to do it?