You'll never guess who this is.... 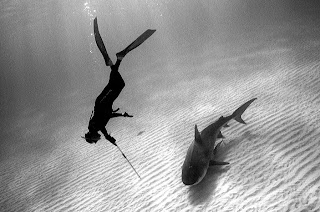 Click on the image to enlarge
No, it's not a very young new world record apnea diver, and it isn't a daring freediver about to dispatch a large tiger shark with a bang-stick either.

You probably won't recognize him although you see him constantly in TV - Animal Planet, Discovery Channel, National Geographic, BBC. However, you will never get to see him in the documentaries freediving with tiger sharks; maybe with other shark species such as, say, lemon sharks.

His appearance is refreshingly boyish enhanced by a well-worn base-ball cap but he sports an unmasking grey beard. So, a youngster he is not.

You still have no idea who it is?

OK, I won't torture you anymore.

Tarammmmmm - the guy in the pic is the "Doc", the legendary "Herr Professor Dr. Samuel Gruber", as he would be addressed to in Germany and Austria!!!

Although we had exchanged a few e-mails before, it was not until last month that we actually met, quite appropriately in "our" element - in the Bahamian Sea, at Tiger Beach to be precise. The good old Doc was with a BBC film crew on a chartered vessel that was anchored close to the "Dolphin Dream", our boat.

Samuel invited me over to the yacht he was on to dive "his" spot where he wanted us to play with a big tiger girl. That was where I "framed" him and the shark.

I like this memorable image - it is sober, almost minimalistic: Doc, the tiger, and the rippled sand of Tiger Beach.

Posted by Wolfgang Leander at 23:57