My comment on the previous blog: When will these brainless macho shark anglers finally get it??... 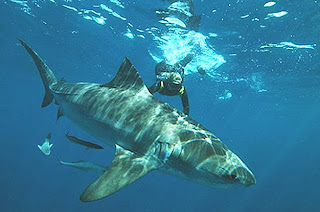 What goes through their thick heads when they see a photograph of a graceful tiger shark in its element? Probably just a primitive hunter's reflex thought: "Wow - would that one not make for one helluva trophy?"

It is sickening to see a tiger shark, any shark, hung up by its tail, invariably with the grinning perpetrator next to his victim.

Recreational shark fishing should be forbidden. No catch-and-release. Sharks should be left alone. Period.
Posted by Wolfgang Leander at 00:21