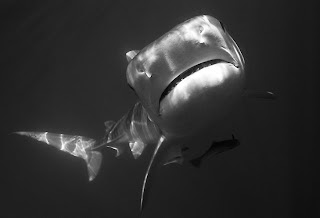 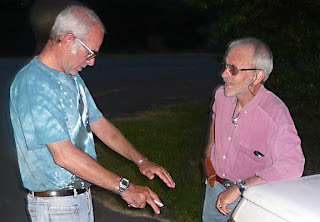 Jifa (left) explaining to Wolf how to fend off a 4m tiger shark with a burning cigarette.
Photograph: Felix Leander
Click to enlarge

Jifa is old school French (down to earth, elegant, "foenny" - verrrry French, much like Yves Montand or Jacques-Yves Cousteau) and lives in South Africa, in Hermanus, to be precise. Why South Africa? Ahhhhh, bon alors.... let me make a VERRRRRY long story VERRRRRRY short:


Jifa loves great white sharks, and his friend Andre Hartmann suggested that he should move to White Shark country, which is what Jifa did about six years ago.

I have known Jifa virtually through a shark-list, and after exchanging a few private mails and seeing how combative and critical Jifa is, I thought I should get to know this interesting European guy.

Jifa knew about my plans to go back to South Africa in March 2008, so we decided to meet. That happened about two months ago at the airport in Cape Town. We recognized each other right away, both greying old farts, both rather slim, both wearing sharky T-shirts, and we greeted each other as good old friends do - with a big hug and a kiss!

Anyway. Jifa joined me about three weeks later in Tiger Shark country (Umkomaas / Scottburgh). He had never dived with tigers, and was probably - how should I put it? - a bit apprehensive of the alleged danger "man-eating" tiger sharks pose according to all those shark experts who have never dived with these gentle beasts.

Our first joint dive was rather unusual. Jifa had to fix a new and extremely complicated mask with earflaps, and meticulously check his old camera, a venerable Nikonos V, on the inflatable rubber boat which took him about 40 (forty!!) minutes.

He should have done all that at the hotel, right? He didn't. You have to know that Jifa is: 1) a perfectly chaotic person, and 2) at the same time a completely chaotic perfectionist - difficult to understand??? Well, I do as I am just like him in those respects, and in some others, too...

Back to our first joint dive: I was in the water playing with, and photographing, the tigers girls long before Jifa finally felt that he was ready to join everybody else, armed with his flashy orange colored camera.

I don't think I have ever seen a shorter dive in my whole life - Jifa cautiously slipped into the water, looked down on his camera, doing something, probably re-checking the pre-set focus, and the next thing I saw was good olf Jifa fending off a 4 m tiger shark who wanted to grab his Nikonos. He then rushed back to the boat with an almost invisible thread of blood trailing behind him! This all happened in a matter of maybe 45 seconds.

For the sake of authenticity, here is Jifa's own account of that memorable tiger shark encounter:

Right back from Umkomaas where I had the utmost pleasure to dive with Tiger sharks, our Wolfgang and his son Felix (yes, all together!) on Aliwal Shoal, I believe it is my duty to inform members of this group about a shark "attack" which oddly enough came unnoticed to 'The Sun'. Which is a shame, even a scandal, especially because the victim was no other one than me (well, mainly my Nikonos camera, but anyway... ).

And so, on my very first day of diving, I was the very last one to enter the water after an awfully long preparation and checking (and double-checking and triple-checking) of a new mask supposed to protect my right ear-drum, three times perforated over the last nine years and thus quite fragile.

Because of the necessity of getting used to this mask, I had decided to start with free-diving rather than scuba, as initially planned. Immediatly, I was under the charm of tens and tens of Blacktips (Carcharhinus limbatus) graciously "balleting" through a crystal clear (and deliciously lukewarm) water, and having not seen sharks "live" since a hell of a long time (for frustrating but unavoidable business reasons, I have unfortunately been spending much more time in front on my computer screen than underwater these last years), I started to photograph them.

One shot, then re-arming (for those not in the knowledge, the Nikonos V is a non-reflex non-digital camera, and you need to re-arm after each shot), a second shot, then re- arming... and impossible to bring the viewfinder to my eye! Considering that the camera was probably 30 cm/1 foot from my face, all I could see was a wide white stripe above the camera, that I successfuly managed to push away with my left hand without having to apply a huge strength.

The camera was back to its legal owner, but the white stripe was still there and I pushed it again, and it disappeared. I believe I was smiling around my snorkel as it was reminding me of a young dog jumping at a sandwich just before you bring it to your mouth (my old husky was simply brilliant at this game when he was a teenager).

Somewhere in the very bottom of the spongious thing which is my brain, a sensor had registered that, for a Blacktip, the lower part of this snout was weirdly not pointed, and amazingly wide. But, as my main concern was to get my camera back, it remained some kind of unnoticed by the main unit... And I went my way, ready to take a breath and go down a little bit, when I felt a little pricking on my right third finger.

This time, my brain was fast, as I had the time to think "Oh sh...t!" before even looking at it. It was bleeding, and quite profusely. OK, I know that the story of human blood attracting sharks is nowadays almost unanimously considered as a legend, but I decided that I had a slight problem with the "almost", that, at this very moment, I didn't feel like contributing to the dispelling of this myth, and that, considering my trip to Umkomaas, 36 hours earlier, had ended with an exploded tyre and two hours of waiting at night in a quite "touchy" area (some humans are far more dangerous than sharks), my private luck tank was possibly in need of a small refilling, and I made it back to the boat.

Overall duration of this first "dive": probably one minute, and I hadn't seen one single Tiger.

Mathilda? Of course I had seen a Tiger, and really close. It is only when Wolf came back on the boat for reloading his own Nikonos that I learnt the author of this savage aggression was a 4 metre female Tiger shark, as he had witnessed everything! She was right under the surface when I entered the water, and I only looked under myself. Then she came to me from behind and then underneath, so I never saw her (but her snout... ).

Wolfgang was not 100% positive, it might also have been Dartboard (a nickname earned through numberless taggings), but Mathilda had already stolen two cameras within the previous two weeks, so it is quite difficult not to suspect her first... Maybe she decided to start a private collection, or she doesn't like to be photographed or filmed? The truth is most likely that she's very investigative and is attracted to sun reflections on lenses.

It finally happened that, despite being quite deep, the cut didn't need any stitches, and I was of course back in the water the day after, with a surgical plastic glove under the normal underwater one - still this thing about blood.

I'm not afraid of sharks, but some old ideas are hard to completely chase away, sorry :-). It seems I will finally keep a small scar. But I'm afraid it will not be very helpful for my macho ego, as nobody will believe that a hardly 1 cm/half an inch one is the result of a 4M/13ft Tiger shark "bite"...

The truth is of course that I cut myself on a tooth rather than have been bitten, and the most amazing point is the gentleness and accuracy of this bite, which was actually an investigative mouthing. The slight scratches on my Nikonos body (not on the lens, thankfully : a 15 mm is quite expensive!) are extremely superficial, and it is only because my hand was on it that it got "bitten".

I have checked that you don't get a substantial premium when declaring an unprovoked shark attack, and I feel too lazy to write to 'The Sun' (pity, because I'm pretty sure they would have made me worldwide famous!), so the story of this horrendous shark attack will remain between us.

Last but not least, to all shark interested people : do go and dive in Aliwal Shoal, by all means. Free or/and scuba diving, never mind. If you're not already, you will come back in love with Tigers. With Blacktips as well, but it's very unfair to them, as they're beautiful and not that small sharks (around 2M/7ft) : as soon as you see your first Tiger, you don't even notice them anymore!

Why don't such breath-taking shark 'incidents' ever happen to me??? That's not fair!! :-)

Another friend of mine, Folkart, a Teutonic 2m giant with hardly any shark diving experience, once had the rare pleasure of having been mouthed rather lovingly by a female tiger shark double his body size.

The 4m girl actually had Folkart's torso in her huge mouth - and only left her teeth marks without even biting through his 5mm wetsuit. *) A neoprene dive suit is not really an effective shield against tiger shark bites when you consider that these creatures can shred turtles into pieces with their powerful jaws.

I dive with these large sharks 'up close and personal' - and I mean really 'up close', like kissing their heads, but they hardly react to my affectionately fondling them. It is as if I would not exist for them. I don't even get a threatening posture from the striped beauties.

As I always say, indifference hurts more than aggression...... :-(

Greetings, Jifa, mon bon ami, I am looking forward to sharing some more unique shark dive adventures with you in the future!!


*) I don't know whether Folkart bought a new wetsuit - probably not. Folkart is a relatively well-to-do guy, but he is also a Swabian, and Swabians are known to be the German version of Scots - obsessively austere and thrifty folks, to put it nicely. So, if you ever meet Folkart diving somewhere, chances are that you will see the souvenir of that remarkable tiger love bite on his worn wetsuit....

Posted by Wolfgang Leander at 08:48

Wolf, I'm NOT chaotic, it only happens I'm a bit of a last minute guy from time to time...

Definitely chaotic...but aren't we all...