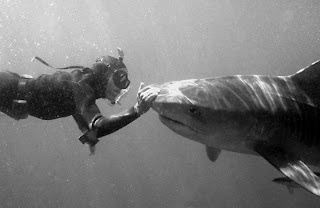 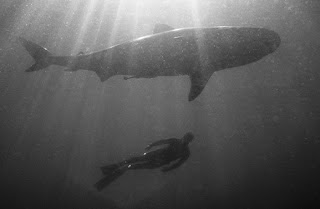 After Felix flooded his video camera, I gave him, full of compassion, one of my Nikonos V so he would have something to do underwater. I thought, OK, a beginner - what can you expect? Let him just play with the toy and have some fun.

Felix photographed sharks for the first time in his life - and look what came out!! Not only did he take some excellent shots such as the ones featured here but two of his pics have already been printed in a rather traditional London newspaper ("The Jewish Chronicle").

It took me decades before my shark photographs were good enough to be regarded as acceptable - and here comes my little boy, grabs a camera, shoots big tiger shark mamas on film - and gets published. Damn!!!

Well, some have to work hard, others are - what should I say? - lucky? talented? I guess Felix is a talented lucky duck. Whatever - I am mighty proud of him.... :-)
Posted by Wolfgang Leander at 22:06

Nice pics Felix! Tell your Dad that it's because of him you are able to pick up a camera and take excellent shots like this right off the bat. It's your DNA!
Congratulations on getting published so early!

Thanks Vice, agree 100 percent. Having watch my dad over the years and looking at his photos have subconciously trained my eyes.

beautiful shots - I think the Leander legacy is here to stay....