Tiger Shark About to Attack Swimmer ..... 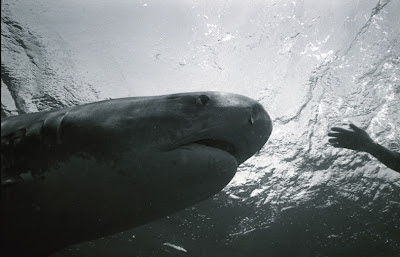 .... is the likely headline you would read accompanying this photo in the media – a picture of a shark that is about to clamp down its powerful jaws on a frail human hand would sell, even in black and white. Sharks are still being portrayed in the media as the quintessential villains. As if the readers still expected them to be the 'mindless killing machines' Peter Benchley and Steven Spielberg made the world believe some 30 years ago.

The reality behind this photograph I have recently taken in South Africa is not sensational in a journalistic sense. Symbolically, however, it carries a significant message: It is man stretching out its hand to the vilified wolf of the sea as if to say:

"We have stripped you of your dignity and we have persecuted you throughout the ages; we have likened your innocence to the worst of human traits, not wanting to admit that the darker side of our nature is not bestial but human. We have ignored in our hubris that our God is the God that also created you, not a lesser god, a god of sharks - Peace to you, finally."

Posted by Wolfgang Leander at 00:55

Great image and a great post. Just today on www.msn.com I came across a feature section on sharks. The main image is a White Shark with its mouth open and the ignorant title: "pit bulls of the sea." It is accompanied by the usual links to research shark attacks. It is frustrating how the media sacrifices sharks to cater to the public's ill-conceived fear of them.

Keep up the good work,

Thanks, Robert. It is indeed a disgrace to always see photographs of Great Whites flashing their teeth... I am sick of those pics. "Jaws" started all this, then came the other movie people still think was 'great' - "Blue Water White Death" - in my opinion the same sensational crap. "Sharkwater" is THE shark documentary the world should see.