Thomas is putting a Tiger in his tank... 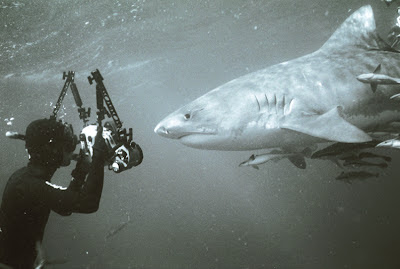 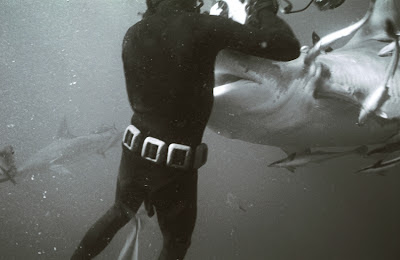 Thomas Peschak and Michael Scholl wrote a fantastic book about South Africa's Great White Shark (that's also the title of the book which was first published in 2006). Not only is it fun reading but scientifically rock solid as well (both Thomas and Michael are marine biologists).

And you should see Thomas' photography - absolutely stunning!!! In fact, I believe Thomas is setting new standards as are other young South African photographers (e.g. Roger Horrocks, Fiona Ayerst). After having seen the book about Great Whites - the Blue Wilderness team gave it to me as a farewell present last week - I urged Thomas to publish a book dealing with Tigers Sharks exclusively.

He didn't say 'yes' or 'no', but looking at the the pics I took of him photographing a beautiful tiger girl near Aliwal Shoal, you will agree with me that he appears to be dead serious about that new Tiger Shark book. So much so that he seems to want to find out in the most personal way possible how forgiving tiger sharks can be.

Getting as close as 20-30 cm to the big tiger girl to shoot a nice portrait ain't enough for Thomas - his scholarly interest in the behavior of tiger sharks goes as far as letting the charming tiger lady nudge him in his tummy with her mouth half open.... Now, THAT I call professional enthusiasm!

Tiger Sharks have a very bad reputation, and yet they are the most gentle sharks I have ever been close to. It is thus very important to dispell the myth of the sneaky man-eater, and give the tigers the dignity they deserve. That is the reason I asked Thomas to publish a book about the magnificent Tiger Sharks of South Africa, the Bahamas, and the rest of the world. So, Thomas: You will just have to do it again!!..... :-)
Posted by Wolfgang Leander at 02:16

Like your blog, so I added a link on mine.

Thanks David - we'll add your blog to our roll.