Ila France Porcher on this year's "Shark Week" by the Discovery Channel.

It's going to be the same old sh...t - pardon me: I mean the same old story. Ila France Porcher - an accomplished shark ethologist, author*), relentless conservationist - has posted on her blogspot a disturbing "Shark Week" preview that shows how the Discovery Channel (DC) people keep riding the "Jaws" wave in a most shameless manner.

The trailer features "Emma", probably the most popular tiger shark world-wide, as a "monster shark" being abused by some moronic DC people. Just to watch, and listen to,   that primitive tatooed guy who 'wrangles' "Emma" is sickening...

14 ft "Emma" is one of the most gentle sharks I have ever encountered. Everybody who knows her loves her. To abuse "Emma" and her gentleness is as perfidious as only humans are capable of being. 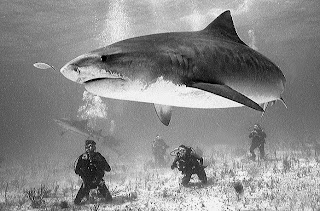 Divers kneeling in front of "Emma" -  that's the way to treat a dignified lady!!  :-)
Photograph: Wolfgang Leander (2009)
Click to enlarge

OK, as many people say, the "Shark Week" executives offer entertainment, and are not out to educate their viewers as an TV enterprise like PBS would. Fair enough. Yet, it is still deplorable to see again and again that their only objective is to 'sell' sharks as extremely dangerous animals.

Shark divers know that sharks are NOT dangerous per se, not even the maligned Great Whites, tigers, and bulls which some 'experts' refer to as the 'most dangerous' sharks.

When you enter the ocean you just have to be circumspect and apply common sense. Swimming, diving or surfing in murky waters where sharks are known to be is simply foolish - if attacks occur under such circumstances it's not the sharks that should be blamed. However, "Shark Week" always blames the sharks, explicitly or implicitly. That's their business, that's how they make money. It's as simple as that.

Personally, I do not believe that the DC people will ever change their 'mission statement' which is to engross, and scare, the masses. So, I wont bother writing them letters of protest or even boycott the show. No, I will watch this year's "Shark Week" if I can. Just to see once again what a wretched lot we humans sometimes are...  :-)

Posted by Wolfgang Leander at 21:52