Largest ever "harvest" of Tiger Sharks by the Natal Sharks Board in the Aliwal Shoal Marine Protected Area - now we know what happened. 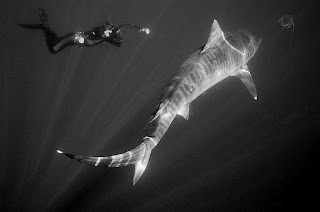 Diving with tiger sharks in the Aliwal Shoal MPA - already a thing of the past?....

It is not a consolation but at least we now know what led most likely to the recent large-scale deaths of the tiger sharks of the Aliwal Shoal MPA.

Mark Addison*) was able to put together what initially appeared to be an enigma - so many tiger sharks, and one great white shark, caught and killed in the Natal Sharks Board gill nets put up in Scottburgh within a few days.

Here is his report:

Finally there is some closure to the events that lead to the deaths of at least seven Tiger sharks and a Great White shark, with the additional capture and release of a further ten Tiger sharks and a Great White shark between the 18th April 2012 and 25th April 2012.All of this at the hands of the Sharksboard and in the gill nets in the Aliwal Shoal Marine Protected Area.

The missing piece of the puzzle washed ashore on the morning, of the 25th April 2012. Wrapped in the net from which it was cut out and dumped offshore of the Scottburgh netted installation in the Aliwal Shoal Marine Protected Area on the 18th April 2012 by the Sharksboard. The net is without doubt a shark net used in Sharksboard’s meshing operation and acknowledged as such in the latest Sharksboard Press Release dated the 25th April 2012 - for once we agree on something!

Where I was wrong, is that the mammal in the net was not a dolphin or dolphins but now - based on the recent find -clearly, a small whale. An academic question iswhat whale, and as I mentioned before sperm whales occur on our coast from at least 40 miles off Durban and Minke’s out to the continental shelf but I can find no sightings of Humpback whales between Umkomaas and East London in the last two weeks, which we are - according to Sharksboard’s media effort  at least - in the throes of an unprecedented early season with sightings on the KZN coast for the last several weeks!

This brings us to the argument over the way in which the whale became entangled in the net i.e. was it alive (as I contend) or dead (as Sharksboard contend). The real time current meter seaward of the Umkomaas river shows the current direction, in the period preceding and during the period of entanglement of the whale in the net, as steadily offshore which makes the proposition of a dead whale drifting inshore against up to 1.8kts of north to south and offshore current a non-starter – let alone the information from the diving operators and fishermen.

The only logical outcome is a live animal swimming into the net and drowning. Sharksboard catch on average five whales (with a 25% mortality) per year in the nets and at least 43 dolphin (with over 95% mortality), so this is not a new phenomenon and clearly happens on a more than regular basis. In a bizarre twist to the current situation, Sharksboard have no records for catching dead whales or dolphins so one can assume that this is for obvious reasons not a logical outcome.

Therefore it follows that the small whale swam into net and drowned, only to be scavenged on by sharks. In all of the multiple tiger shark captures in the Aliwal Shoal Marine Protected Area the reason has always been an innocent and harmless animal in the net which has triggered the scavenging event. So no nets no captures - and given that almost 50% of the sharks arecaught on the way out of a bathing area there is no additional risk to bathing.

As unfortunate as the untimely death of the whale was, the events that ensued could only be described as carnage for the hapless Tiger sharks and Great White sharks. Clearly, the drowned whale in the nets was an irresistible target causing the first batch of Tiger sharks to get caught up in the walls of death whilst scavenging on the now dead whale.

The dumping of the entangled whale near to the netted installation contributed to the additional and unnecessary capture of another tiger shark and two GreatWhite sharks, of which one was killed. One has to question the policy of Sharksboard to dump so close to shore and near to netted installations.

Sharksboard knew they were on rocky ground dumping so close to shore and this lead to the misinformation they put out in the media release of the 18th April 2012 when they reported a “…slick on the water surface on the inshore of the bay…” and on the 20th April when bathing was banned despite there being no “…signs of a slick…”. They knew what they had done and the doubts were gnawing away.

The continual catches exposed their poor judgement. They kept their charade going in a drawn out bathing ban and wild goose chase which they had caused. Sharksboard’s actions have caused the senseless deaths of vulnerable shark species and put bathers at risk!

One definite outcome of this debacle and the poor handling of it by Sharksboard is international outrage and a definite decline in tourism to the area with the much needed international diver revenue declining as foreign tourists are shocked and appalled at the fact that there are gill nets in a Marine Protected Area for which they and their chosen operators are being charged to enter. Simply taking their tourist dollars to better managed and more animal friendly Marine Protected Areas and dive sites around the world.

Fundamentally none of this would have happened if the nets were not there in the first place and the poor judgment of dumping the carcass so near to the netted installation compounded the senseless slaughter of twenty sharks.

All of this in a Marine Protected Area!

Indeed, indeed.... What immediately comes to my mind is the clandestine finning of sharks in the Galapagos Marine Park, also a sanctuary for sharks, supposedly.

If there is no effective protection of sharks, not even in a marine protected area, then there can only be one solution of the problem - the establishment of a complete ban on fishing sharks, for whatever purpose, and in the case of the Aliwal Shoal, the removal of the nets.


I know this is probably not a realistic proposal; yet I believe that it should be the ultimate goal of a concerted action that would have to include the Natal Sharks Board and their willingness to openly discuss and tackle this burning issue.

Apart from the negative environmental impact of the nets, it is the thriving shark dive business in the Umkomaas / Scottburgh region that will be severely affected by the drastic decimation of the tiger shark population.

Other maritime countries which have realized that live sharks can be worth many millions of tourism dollars have enacted a comprehensive ban of shark fishing (commercial / recreational).

Ecologically minded divers won't patronize countries that do not protect their sharks and other endangered marine animals.

I have said it before, and I will repeat it: Without tiger sharks the shark operators of Aliwal Shoal will not be able to attract international dive tourists to that destination anymore.  As simple as that. 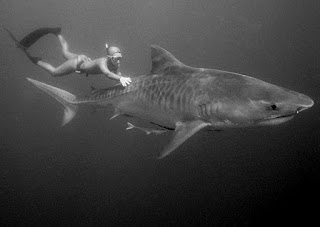 When I first dove in the Aliwal Shoal MPA early in 2007 I had the most incredible encounters and close (and totally safe!!) interactions with the local tiger sharks. Diving with the cool "striped girls" were unforgettable highlights, some quite emotional, of many decades of shark diving adventures.

Up until 2008 / 09 Aliwal Shoal was, along with Tiger Beach in the Bahamas, the only dive destination world-wide where divers could see, and get close to, tiger sharks on a regular basis. Not anymore. Tiger shark sightings in Aliwal Shoal are becoming an exception to what used to be a rule.

While I absolutely love diving at Tiger Beach, I miss the tigers of Aliwal Shoal sorely. The certainty that most of them, if not all, are dead by now saddens me and so many others who knew them by name deeply. They were: "Dartboard"/"Karin", "Ella", "Sabine", "Snowflake", "Mathilde".

*) Most of you will recall that I had a serious "issue" with Mark and Gail Addison regarding the injurious baiting tools they thoughtlessly used to attract the tiger sharks which resulted in an abrupt break-up of our friendly relationship. We are not on speaking terms anymore (their decision); however, that does not hinder me from recognizing the commendable work Mark has demonstrated by closing the shark net debacle.

Posted by Wolfgang Leander at 15:00