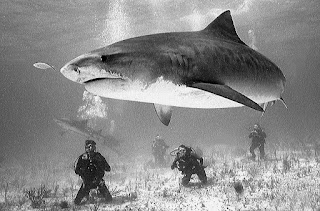 "Emma" parading herself in front of some of her fans.
Photograph: Wolfgang Leander (2009)
Click to enlarge

If you haven't secured a tiger shark diving trip for yourself yet, you'd have to wait until 2014. All the operators, at least the most experienced among them, in my and others' opinion actually just two: Scott Wayne Smith ("Dolphin Dream") and Jim Abernethy ("Shearwater"), are fully booked throughout this year.

Here is the one and only chance to join a group of shark enthusiasts in October to "do" the legendary sharks of Tiger Beach in the Bahamas islands.  The trip arranger is Dominick ("Dom") Macan of DiveAdvice.


Dom's back-to-back trips in November 2013 are already closed, and I understand these trips sold very quickly.

No wonder: Tiger Beach has become a hugely popular shark dive destination over the last few years, and rightly so.

Last November we dived between Tiger Beach and and a near-by place christened Fish Tales by Captain Scott Wayne Smith which made the trip absolutely fantastic. Fish Tales is not an escape alternative anymore if the weather conditions are not perfect at Tiger Beach proper but an excellent shark dive spot on its own merits.

A friend of Felix who went diving at Tiger Beach early this month on the "Dolphin Dream" talked about an incredible tiger shark action: At one point he and his fellow divers counted between 8 and 10 tigers that were on the spot at the same time - now that we haven't seen in a long time, and is perhaps an indication of the effects of the recently enacted ban on shark fishing in the Bahamas.

I consider the dives at Tiger Beach to be the best, world-wide, if you are looking for interactive shark diving. Nothing, absolutely nothing on earth, or should I say in the vast oceans?, not even South Africa, will match the incredible experience you, as an individual, can make diving with large sharks (all used to human presence and as such neither shy nor aggressive) in this prime sharky spot.

OK, so Dom has now been offered to charter the Dolphin Dream for a third trip in the second half of October. Understandably, he would accept the offer only if he could fill the boat. He has asked me to explore the possibilities of finding enough people for him to feel comfortable to take over the charter.

Thus far, we have lined up some six divers, including myself, who are keen on making this trip happening  -  Dom needs to have a total of twelve divers to commit to  chartering the "Dolphin Dream".

Again: This could be your one and only chance to dive with tiger shark legends such as "Emma" and "Smiley" this year. 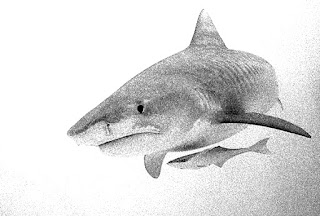 "Emma" -  most popular shark in the world.
Photograph: Wolfgang Leander (2011)
Click to enlarge 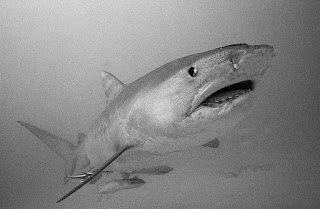 If interested in joining me and other confirmed shark lovers on this trip,  please send me an e-mail:  wolf@oceanicdreams.com

Posted by Wolfgang Leander at 16:26

It seems clear from these findings that if sharks are "attracted" to an object in the water, this is probably because of its contrast against the surrounding water, rather than it's colour.
cheap football jerseys

Felisa - what kind of non-sense have you written?....