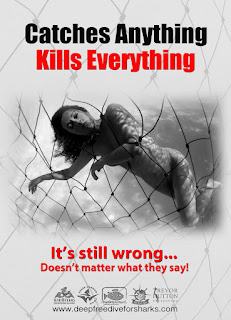 It certainly takes a lot of guts to overcome the natural sense of shame to exhibit your body as created by God in public - even if you are a good-looking guy or gal.

Lesley Rochat, South Africa's foremost shark activist, has no problems with her nudity when it comes to making herself heard - or seen - in her campaign to draw the public's attention to the plight of the sharks in her country.

The latest tiger shark deaths in the Shark Board's gill nets in the Marine Protected Area of Aliwal Shoal prompted her to find out for herself what it could be like for a human to get entangled in a shark net and drown miserably. Her experiment drew her even closer to the animals she fights for with all her might.

Lesley has published a passionate plea in her blogspot to protect the sharks of South Africa from being killed senselessly by commercial and recreational fishermen, poachers, finners, and the lethal shark nets put up decades ago in the beaches of Scottburgh (about 40 miles South of Durban) to supposedly keep bathers and swimmers safe.

People who are acquainted with Lesley know that she is a multi-talented individual with an impressive personal history of professional achievements. Whatever she does, she puts all she is, and all she can, in her undertakings which is why I always thought she should be leading a concerted campaign with the active support of world-renowned shark scientist Dr. Leonard Compagno to make the authorities realize that the controversial shark nets have proven to be ineffective and, indeed, unnecessary to achieve their purported objective.

With a view of last week's large-scale deaths of as many as 17 (!!!) tiger sharks in Scottburgh I would think that those most affected, namely the Aliwal Shoal shark dive operators, will now join forces with Lesley to try to convince the local government that the shark nets are neither good for the marine life in the MPA nor for the ever growing dive tourism that creates jobs and brings in much collateral business such as land safaris.


Read now what Lesley posted in her latest blog, and if you can help disseminating her message, please do so. All those already involved in the campaign, and the sharks, would love you to be part of this worthy endeavor.

Yeah this is a good new, it's like making lamps with human skin, or have a human body as a carpet in your living room. Body cult and exhibition, due to god's glory holly crown, is a really primitive state for human beings. It's good to see that things begin to move the right way, and as the famous advertisment "rethink the shark" says, a chair is by far more dangerous. In my opinion also I think is being naked the only way to get attention ?

Making lamps with human skin? You are alluding to the notorious Ilse Koch, wife of a German concentration camp commander, who had such gruesome "accessoires" in her living room. Not an appropriate analogy, I am afraid to say...

I should have better reread me, as I was under the fire of emotion, I have forgotten some parts which made it not really apropriate that's sure., I omitted to precise, that I was speaking about the use some are doing with "animals trophy", like shark jaws with "sport fishing" or who use and wear real fur.Also it made me think and using this "gruesome" analogy, cause when debating with friends, around this kind of theme, I often use it to make them think about a reversed way to see things. And when I saw the picture it made me think about that example, switchin people and humans at the place of what is done to animals. I hope it's a bit clearer that way, but correct me if I'm wrong :).